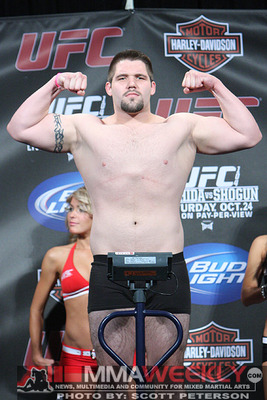 Chase Gormley is ineligible for regional rankings due to inactivity.
Fighters must have at least one completed MMA bout in the past two years to be ranked.

With a background in wrestling, Chase attended Torrance High School and was a part of the winning league wrestling team. He went to college at Montana State University - Northern and Lindenwood University, where he was a NAIA All-American Wrestler.

He began training MMA as a 13 year old, and began competing professionally in 2007 quickly reeling off six straight wins, including one over veteran Eric Pele, before being thrown to the wolves of the UFC's heavyweight division. After back-to-back losses to Stefan Struve and Brendan Schaub, Gormley was cut from the promotion in 2010.

He has since had success, competing and mostly winning in well esteemed promotions such as "Gladiators FC", "MFC" "Titan FC", "RFA" and "Bellator".