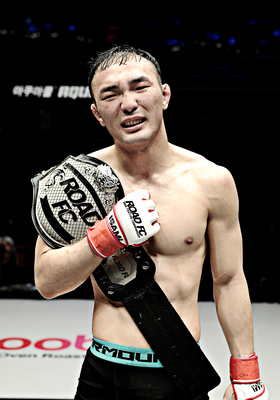 Soo Chul Kim is a South Korean mixed martial artist competing in the bantamweight division. He is the first and current ONE FC Bantamweight Champion.

At only 18 years of age, Kim made his professional MMA debut in a featherweight match-up against DEEP and Shooto veteran Yasuhiro Kanayama. He won by first round submission to win the Rising On featherweight title. After this fight he dropped down to bantamweight.

Kim fought Leandro Issa at ONE FC 1 at the Singapore Indoor Stadium on September 3, 2011 and lost a unanimous decision. On February 4, 2012 it was announced that he would be facing Gustavo Falciroli at ONE FC 2 in Jakarta, Indonesia on February 11, 2012. Kim would lose to Falciroli via submission in the first round. He lost his next fight to Jae Hoon Moon at Road FC7 but then went on to defeat experienced Japanese fighter Shoko Sato by TKO in round four after the fight had been ruled a draw at the end of three rounds. Kim then fought Kevin Belingon at ONE FC 5 at the Smart Araneta Coliseum in Manila on August 31, 2012. He won via unanimous decision.

On September 14, 2012  ONE FC made an announcement through its official Facebook page that Kim was set to rematch Leandro Issa for the inaugural  ONE FC Bantamweight Championship at ONE FC 6. Kim won the title after brutally knocking out Issa 15 seconds into the second round.