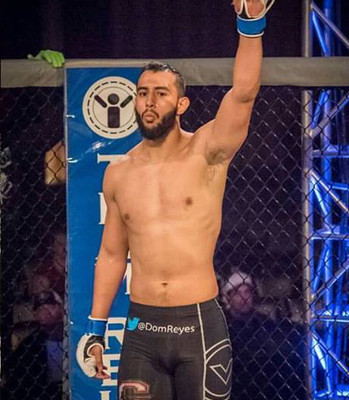 Fighting for a major organization has made Dominick Reyes ineligible for regional rankings.

Reyes was born in Hesperia, California, on December 26, 1989, and is of Mexican American descent. Reyes was an athlete from a young age: he wrestled and played American football, aspiring to play in the NFL. Reyes grew up in a poor family, his parents encouraged him to pursue sports in order to avoid getting involved with gangs. Reyes was a four-year Division I starting safety in college for the Stony Brook Seawolves.


Reyes graduated from Stony Brook as the program's all-time leader in solo tackles (158), recording
259 tackles in total. While he received attention from NFL teams, his speed was deemed 'average' and
he ultimately went undrafted in the 2013 NFL Draft.

After going undrafted in 2013, Reyes decided to pursue a career in mixed martial arts. He would start as an amateur, where he would go 5-0, ending his amateur career with a 9 second KO of Shane Mervau to become the University of MMA LHW Champion.

Reyes would make his professional MMA debut in 2014 under the KOTC banner, against Jose Rivas Jr. who he would finish within 3 minutes of round 1. Dominick would then win his next four fights before he would fight Jordan Powell at LFA 13. Reyes would take less than a minute to finish Powell with a headkick, punching his ticket to the UFC.

He would make his promotional debut as a moderate favorite against Joachim Christensen at UFC Fight Night 112 and would take less than 30 seconds to dispose of the Dane. Next up he would submit Jeremy Kimball in the first round before taking on former heavyweight Jared Cannonier. Reyes would once again waste no time disposing of his opponent, putting Jared away within the first round. Following his win over Jared, Reyes would take on former title challenger, Ovince St. Preux at UFC 229. This would mark the second time in Reyes career that he went to a decision but he would defeat OSP via unanimous decision. This win proved that Reyes was someone worth keeping an eye on in the divison.

Dominick would take on another former title contender in the number #6 ranked Volkan Oezdemir. Volkan would take Reyes to new depths as the fight would go all three rounds with Reyes spending a lot of the fight on the backfoot. Reyes would however walk away victorious and remain undefeated after winning a highly controversial split decision. Following his controversial win against Volkan, Reyes was set to welcome former middleweight champion Chris Weidman to the lightheavyweight divison. The welcoming party would be over quick as Reyes would put Weidman away within the first round, securing his date with the greatest lightheavyweight of all time as Reyes got his title shot against Jon "Bones" Jones.

Reyes would get his first PPV main event at UFC 247 as he would finally fight for the title against Jon Jones. Reyes was a moderate underdog coming into the fight but he would prove that he belongs as he would go toe to toe with Jon through out the fight. This time however, Reyes would end up on the wrong side of a controversial decision as Jon would retain his belt via unanimous decision, in a fight many believe Reyes should have won.

Reyes would get lucky though as the news broke that Jon Jones would vacate his LHW title in August of 2020. This meant that despite having lost to Jon, the controversial decision secured him as one part of the vacant title fight. The opposing party, fighting for the vacant title would be Jan Błachowicz, the fighter who was supposed to be next in line for Jon Jones. Jan was coming off of a KO win over Corey Anderson earlier that year which secured him his part of the title fight.

Reyes was booked to take on Jan Błachowicz at UFC 253. Reyes seemed to write Jan off leading up to the fight and the oddsmakers seemed to agree as Reyes was a moderate favorite. When the cage door locked behind them tho, Reyes would quickly realize that he had been mistaken. Jan would land some brutal body kicks leaving red marks all over Reyes body before putting the peoples champion away in the second round with some brutal punches to capture lightheavyweight gold.

Despite these two setbacks Reyes would return less than a year later to try and prove that he belonged in the top of the divison as he took on the new blood at the top of LHW in Jiří Procházka. Reyes would knock Jiri out with an upkick in the second round but no one noticed that he was out and Jiri would wake up within a few seconds and gather his thoughts before brutally finishing Reyes at the end of the second round. Jiri did later admit that the upkick from Reyes knocked him out.

There has been no word on who Reyes is set to fight next or what he plans to do now but despite his three straight losses, The Devastator remains in the top 5 of the LHW divison as of now.