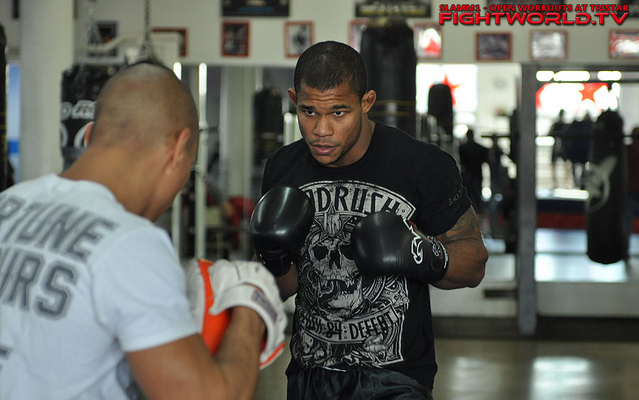 Alex Garcia is ineligible for regional rankings due to inactivity.
Fighters must have at least one completed MMA bout in the past two years to be ranked.

Alex Garcia is a Dominican welterweight fighter currently signed to the UFC. He trains out of the Tristar Gym in Montreal, Quebec. Of his twelve career wins, ten have been finishes with equal numbers of submissions and T/KOs. He is 6-1 in his last seven.

Garcia began his career in 2009 with a first round submission victory in his home country of the Dominican Republic. From there, he began training and fighting exclusively in Canada. He would pick up another first round victory a couple months after his debut fight and would be signed by the promotion Ringside MMA. Over the next twenty two months, he would compile a record of 5-1 with the company. All of his wins were stoppages and his only loss was to UFC veteran, Seth Baczynski, who would return to the UFC after their fight. He would take a year off from competition but would return in late 2012. Over the next ten months, he would compile a 3-0 record including his first decision.

In late 2013, it was announced that Alex had been signed to the UFC. He was supposed to make his debut against the undefeated Swede, Andreas Stahl, but an injury forced his opponent from the card two weeks before the fight. He instead made his debut against TUF: The Smashes cast member, Ben Wall, who normally fought at lightweight or below. Garcia would win via TKO in just forty three seconds. He took on Sean Spencer at UFC 171 and was able to pick up a split decision victory to extend his winning streak to six. That streak was then broken in a close decision loss to the streaking Neil Magny.