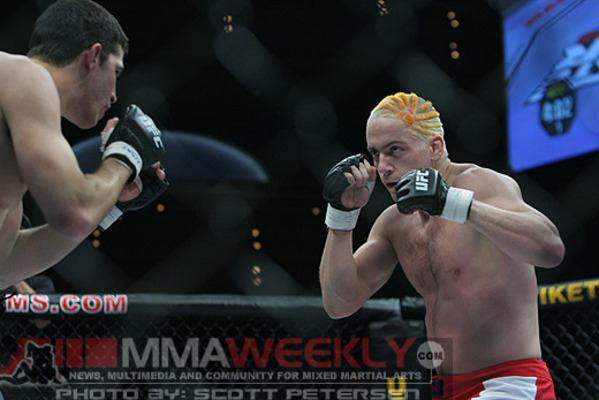 Jonathan Goulet is ineligible for regional rankings due to inactivity.
Fighters must have at least one completed MMA bout in the past two years to be ranked.

One of the most well known Journeyman in MMA history, Jonathan Goulet faced some of the toughest competition out there going up against fighters such as John Alessio (wins via unanimous decision), Jay Hieron (win via technical knockout), Shonie Carter (win via submission), Mike Swick (loss via knockout) & Josh Koscheck (loss via submission). However what many casual fans may know Goulet for is that he was on the receiving end of the fastest knockout in UFC history, 0:06 seconds to be exact after a punch orchestrated by Muay Thai expert Duane Ludwig which sent the Canadian face first to the mat. Goulet fought nine times in the UFC going 4-5 being fed to a previously formentioned array of different opponents. While Goulet posses very good all around skills which he can thank to the training he received during his time training at Tristar & Sityodtong, his chin has held him back from ever reaching the top as 9 of his 12 career losses have come by way of knockout aswell as 3 of his 5 UFC losses coming via way of knockout with the other two by way of submission.