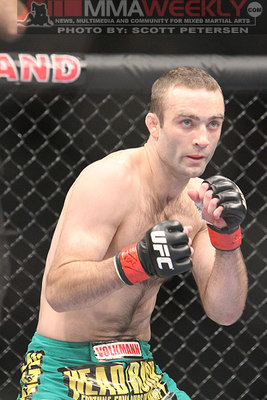 Jacob Volkmann is ineligible for regional rankings due to inactivity.
Fighters must have at least one completed MMA bout in the past two years to be ranked.

A product of the Minnesota Martial Arts Academy, which counts standouts Brock Lesnar, Sean Sherk, and Brock Larson among its alumni, Jacob Volkmann went unbeaten in his first nine fights before joining the UFC's welterweight division in 2009. After back-to-back losses in competitive efforts against top-flight welterweights Paulo Thiago and Martin Kampmann, Volkmann dropped to 155 lbs. After cutting the extra weight, he earned his first UFC win with a split decision victory over Brazilian fighter Ronnys Torres in 2010.

Volkmann went on to earn 5-1 in his next six fights with victories over Paul Kelly, Antonio McKee, Danny Castillo, Efrain Escudero, and Shane Roller with his only loss coming to submission specialist  Paul Sass via triangle choke.

Although he has no knockouts on his record, Volkmann has looked to head hunt in his early appearances inside the Octagon, relying on his physical toughness to keep him in the fight with more technical strikers. His true skill lies on the ground, where more than half of his wins have occurred.

Following a loss to Bobby Green at UFC 156 Volkmann was let go by the company. Shortly after being let go Volkmann would sign a multi fight contract with the World Series Of Fighting and is expected to make his debut at the 3rd event for the promotion in June.