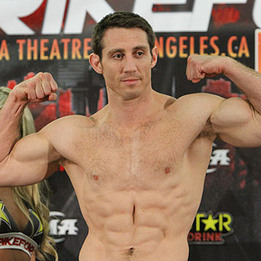 Rockhold took the center of the cage in the Southpaw stance then switched and blocked a few range-finding kicks from Kennedy. Rockhold pushed Kennedy into the fence and worked knees to the legs and midsection then broke away. Rockhold dodged another kick and landed a couple of glancing straights then won a positional battle in the clinch. Rockhold dodged a straight and stunned Kennedy with a three-punch combo starting with a left then pushed Kennedy back into the fence. Kennedy turned the tables with a nice takedown off the cage and landed in half guard. Rockhold went fishing for a Kimura and pulled the arm out, nearly straightening the limb before Kennedy escaped the hold and passed to side mount briefly. Rockhold stood and turned Kennedy into the fence.

Again Rockhold walked Kennedy down to start the second and launched a heavy head kick that Kennedy blocked. Kennedy rushed forward off the kick in search of a takedown but Rockhold took his back in the ensuing scramble and got a deep hook in. Kennedy got back to his feet and Rockhold walked him down again, landing a straight while Kennedy kicked at his legs. Rockhold went to the body with a few punches and a kick. Kennedy landed a flush right hand but Rockhold walked right through it then stuffed a Kennedy takedown and briefly rolled for a crucifix before standing again. Rockhold got active with his kicks and again took a flush right hand to no effect and cage control was all Rockhold to this point in the fight.

Rockhold pushed Kennedy into the fence in the third and the action was halted so McCarthy could warn both men, Kennedy for a low blow and Rockhold for grabbing the fence. Rockhold landed a nice right hook on the restart and Kennedy attacked with kicks then the athletic middleweights jockeyed for position in the clinch. Rockhold separated then walked forward and blocked some hard kicks to counter with a nice straight left to the jaw. Kennedy had more success this round with his kicks but he was still moving backward and taking shots at the end of Rockhold's strikes. Kennedy dove in and got a takedown as the final minute approached and took the champion's back, but Rockhold shook him off and got to his feet. Rockhold broke off and landed a nice hook then continued to walk Kennedy down.

Both men showed a sense of urgency early in the forth, Kennedy landing leg kicks while Rockhold landed some nice hooks up high. Cage control was all Rockhold again as Kennedy moved back after every exchange without countering with anything heavy. Neither fighter was throwing combos behind one or two strikes at a time, but their single shots had power. Kennedy landed a right hook but was flattened but a Rockhold thrust punch and Rockhold followed up with punches on the ground. Kennedy recovered quickly and worked himself into a Guillotine position on the bottom, Rockhold fighting out of the hold and getting to his feet quickly. A torrid clinch battle and grappling exchange followed and Rockhold ended the round on top in side mount. Heading into the final round it was looking like Kennedy needed a finish to take the belt.

The workmanlike pace continued into the fifth, and while neither fighter was spectacular, the steady pace of striking and grappling was impressive considering how powerful both men were. The fifth largely resembled the earlier rounds, with Kennedy backing off and looking for openings that Rockhold refused to allow him while the champion marched forward with heavy body kicks and occasional straight punches, fighting off most of Kennedy's takedown attempts. In another competitive grappling scramble, Rockhold wound up on top but took a knee to the head in the process. Back on the feet, Kennedy landed a nice right hand but Rockhold displayed a great chin and did not react. Rockhold had a small cut under his left eye but otherwise was none the worse for wear and he continued to press his attack on the challenger. Rockhold attacked in the final 30 seconds, landing a big knee in the clinch but Kennedy fought to the bitter end.

The judges scored the bout 49-46 across the board for Rockhold, who retained his middleweight title.

Speaking with Mauro Ranallo following the win, Rockhold said, "Five round wars suck, but hard work pays off. I controlled the pace and I defended most of the takedowns and got a couple of my own. I feel good. I tried to head hunt and he has some funky strikes so it was hard to time."

MMA Oddsbreakers breaks down the betting odds between Tim Kennedy and Luke Rockhold with analysis from host Nick Kalikas and guests Jeremy Botter and Damon Martin.

Today I am feeling a little better about my life. This is me shooting with my sisters. http://t.co/1pPjq79D

I accept ur challenge @spideranderson let's do it

@ChrisWeidmanUFC thanks bro, went pretty good obviously not as good as yours! Lot of talk about us this week huh, lol wish u the best!

“@tboyd1906: @TimKennedyMMA Where can I pick up a "Come and Take It" shirt like you wore to the Rose Garden?” here @Ranger_Up

Thanks everybody, that was a tough fight, wasn't my best but I got the job done!

@TimKennedyMMA lol RT @akajav: @rockholdMMA made a friend last nite &amp;amp; now it seems that they are best buddies!! http://t.co/JYLeWYi3

Thanks for all the support. I fought my ass off. I'll be back better than ever. Congrats to @rockholdMMA he's a great champion.

8 hours and 15 minutes
after

Weighed n on the unofficial scale in back perfect! Commission told they were exactly the same. Sorry I missed but I did make it 15 min later

20 hours and 4 minutes
before

23 hours and 34 minutes
before

Changed my personal facebook page to a fan page &amp; merged with my existing fan page. At 10k likes, ill do a giveaway! https://t.co/S0f9ozam

2 days and 34 minutes
before

I have 25 copies the current @tapout magazine wear a patriotic shirt find me at weighins. I'll sign and give you. http://t.co/1bQ7Ueyr

I am so excited about the Olympics. I have major USA pride. Can't wait to see us crush the competition.

3 days and 57 minutes
before

Just got to hotel in Portland, man @Strikeforce hooked it up tv's in the bathroom and all #PimpStatus http://t.co/RjhXfKB2

Han•gry (han-gree) adj. A state of anger caused by lack of food; huger causing a negative change in emotional state. (my current condition)

My resting heart rate is consistantly in the mid thirties, I'd say I'm ready to go! July 14th cardio is king

All u #ASNutHuggers explain this takedown defense to yourself! http://t.co/6pQ8ya1z I'm done with this till after my fight. peace out

Why is it that the only thing on TV is cooking and dining shows? It's like the god of cutting weight is trying to punish me for something.

“@Andrew291082: @TimKennedyMMA And yet all of that pales in comparison to a failed drugs test” good point.

Wipe grease on your arms, grab your opponent shorts, and knee them in the face when they are down. That's how champions should act?

Guys it wasn't just the knee it was the grease the shorts grab, just wasn't champion like

It was so Canadian of Patrick Cote to walkout to out to MC Hammer's Too Legit 2 Quit. Someone should tell him that song is old.

Easton complaining that Minjavar front kicking his cup. How can u miss that thing #elephantitisCup

I can't decide if Steven Seagal is bat shit crazy or just totally delusional. He claims to have shown Silva 2-3 things for this fight.

These are my picks for @ufc 148 Mendes, Kim, Cote, Griffin, Sonnen by 4th round TKO.

It's always nice to finish with ur best sparring day of ur entire camp! @Strikeforce 14th @SHOsports here I come

If you are in the military and would like a free digital copy of @tapout magazine with me on the cover email staab@tapoutmagazine.com