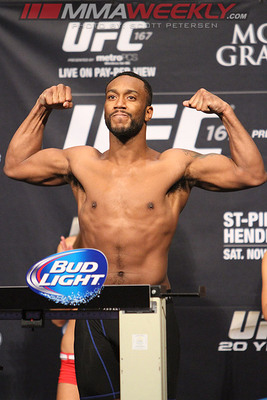 Anthony Lapsley is ineligible for regional rankings due to inactivity.
Fighters must have at least one completed MMA bout in the past two years to be ranked.

Lapsley was born in Boston, Massachusetts where he lived until he was 11 years old when he moved to Fort Wayne, Indiana. Lapsley played various sports including basketball and after his freshman season playing high school football ended, his coach encouraged him to try wrestling. Lapsley began the sport and excelled, earning a state championship but did not continue his career as he did not have the academic requirements to get a scholarship.

Lapsley made his professional mixed martial arts debut in 2006. He quickly amassed an undefeated record of 7-0 before his first loss to Carlo Prater.

Lapsley has fought for a variety of promotions including ShoXC, HDNet Fights and King of the Cage, where he was the Welterweight Champion.

Lapsley made his Bellator debut in 2009 at Bellator 7 where he defeated Ryan Williams via submission.

In January 2011, Bellator announced that Lapsley will be replacing Steve Carl in the Bellator Season 4 Welterweight Tournament and he faced former UFC and Strikeforce veteran, Jay Hieron in the quarterfinals. Lapsley lost via controversial stoppage when referee Josh Rosenthal stopped the bout, believing incorrectly that Lapsley was unconscious from a submission.

In October 2013, it was announced that Lapsley had signed with the UFC. He made his debut against Jason High on November 16, 2013 at UFC 167. He lost the fight via unanimous decision.

In his second fight for the promotion, Lapsley faced Albert Tumenov at UFC Fight Night 40 on May 10, 2014. He lost the fight via knockout in the first round at 3:56.