Chris Weidman defeats Tom Lawlor via Submission at 2:07 of Round 1 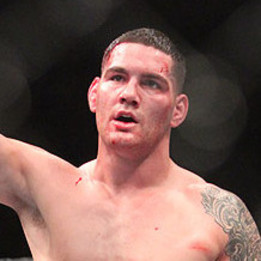 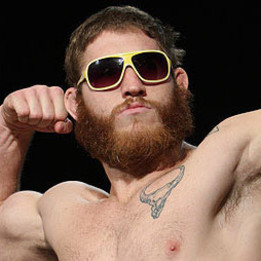 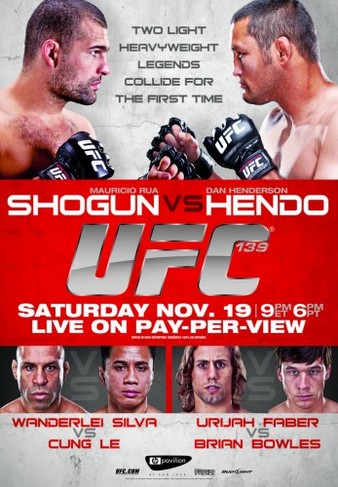 The fifth bout of UFC 139 featured Tom Lawlor taking on Chris Weidman in the middleweight division.

Weidman landed a kick high to the body and then quickly moved in completing a takedown. Weidman transitioned to side mount, snaked in a deep D'Arce choke, and put Lawlor to sleep with the vicious submission.

The official end came at 2:07 of the first round for the winner, Chris Weidman. Speaking to Joe Rogan in the post-fight interview, Weidman commented, "I'm real, real, real happy, Tom Lawlor is the best guy I've gone against so far... I've got God-given ability with long arms, and they [my coaches] make it work for me."

My @ufc #UFC139 rat tail is gone after 6 months http://t.co/AIuIwxPd anyone want this piece of one of a kind memorabilia?

:) rt“@ufc Tweet us your UFC hand turkeys this week, but be advised that @FilthyTomLawlor takes the art very seriously http://t.co/09pcX08Q”

4 days and 43 minutes
after

. @KyleHollandRP Its time to break out the baby wipes :)

So only 3 days removed from what was supposed to be a fight, I already weigh 220. Ive eaten so much I have a hard time breathing. Loving it

Hangover. Im starting to think training camp is better for my health than nonstop drinking is.

@ChrisWeidmanUFC for sure man, ill hit you up. I was actually at Studio.8 to see Hendo but didnt see you. I owe you a few drinks buddy:)

:) thanks "@jema911 @grey_son Haha...I could never pull off a walkout like that, @FilthyTomLawlor rocks!”

9 hours and 28 minutes
after

oh he will not! Rt“@TeamQuestMMA @FilthyTomLawlor Heath Sims will get you back for that walkout outfit you put him in!@ClinchGear @danhendo”

9 hours and 2 minutes
after

9 hours and 1 minute
after

7 hours and 47 minutes
after

7 hours and 46 minutes
after

7 hours and 44 minutes
after

Holy shit. One of the best fights ever. I love @danhendo

7 hours and 43 minutes
after

Hey @ChrisWeidmanUFC , you suck at not letting go of chokes before you finish them.Great job tonight and hope to see you out and about!@ufc

4 hours and 29 minutes
after

I just woke up from a nap, what happened now? :) RT“@danawhite Isn't it great when a ref doesn't know when a man is asleep? #Unbelievable”

4 hours and 24 minutes
after

All decked out in my @xbox walk-out gear for UFC 139: http://t.co/tSKaQOQC

1 hour and 31 minutes
after

Hmmmmm which seat do I take? http://t.co/2NhUxU2d

1 hour and 2 minutes
before

@JoeLauzon Thanks buddy! will do for sure!

1 hour and 22 minutes
before

“@arielhelwani . @FilthyTomLawlor CSAC lady's expression from 0:12-0:17 is the MMA highlight of the year. Well done. http://t.co/1gUKScmv”

4 hours and 14 minutes
before

4 hours and 15 minutes
before

@cbdollaway thanks man it means a lot to me. Wish you were here but understand why you arent, get better and see you soon!

4 hours and 16 minutes
before

13 hours and 26 minutes
before

14 hours and 8 minutes
before

Trying to do something useful with my down time. @xbox #kinectsports2 like learn French: http://t.co/v2kGPiKn

http://t.co/EBAhNjjp OF COURSE I MADE IT, DUH

2 days and 25 minutes
before

Check it out on @ufc .com http://t.co/BOAdWM0h I like articles about me!

Thanks to @xbox for hooking me up with an x-box and kinect for my hotel room this week: http://t.co/eWKxfMnO

Happy happy happy birthday to @xbox!! Be on the lookout for some viral videos with me this week!

How will I be able to shave 14 lbs off of THIS by Friday?!?!http://yfrog.com/h3tavoaj

me too “@ryanbader Less than a week out till @ufc 139! Leave for San Jose tomorrow very excited about this fight. @Kingsbu @FilthyTomLawlor”

“@RedRum26 @danawhite Dana you ready for the @ChrisWeidmanUFC vs @FilthyTomLawlor fight! That's gonna be Fight of the Night! #UFC139”

Man, Daniel Tosh is killing it on this Comedy Central standup special. Glad to be a fellow UCF alum! :)

I've been growing a rat tail for #UFC139.I get asked to sell fight memorabilia so this will be the first item that goes on sale=)Get ready!

Ben Henderson should pull this one out. Standing ovation for FOTN for sure!!!! http://t.co/88HL2X3u

Lots of Guida fans at the Honda Center, but I got Ben Henderson. Both guys killed it with their.walkout songs

http://t.co/k4Cbrmvr nice wedgie, ive been enjoying it for a few hours.

I think the crowd at #UFCONFOX was so busy booing Michael Bisping that they missed @DustinPoirier and his darce!! congrats buddy! @ufc

Damnit, Pablo Garza just entered to Florence and the Machine "Dog Days Are Over". Scratch that off my short list for next week.

Is the curse of Japanese fighters legit? I would say yes, but Uyenoyama could be considered a "Japanese" fighter too I guess. @UFCONFOX @ufc

Hmmmm my #UFConFox seats. Does it get any better? http://t.co/Z0xBFSTj

Somehow a dog escaped traffic on the freeway in the OC and led traffic on a low spees chase for about a mile. I luckily captured video.

Agreed buddy!! “@cbdollaway Ufc on fox tonight. I have Cain , I feel his wrestling and conditioning will be to much for JDS.”

on my way!!!!! “@UFCONFOX Things are almost ready at the @HondaCenter! #UFConFOX http://t.co/ksgFnxEx””

good point doom!“@JohnDoomsday #LadiesWeWantAnswers how can you have a good friend then hate her then be friends again WTF men don't do that

Well #UFConFox is going to be AWESOME!!! Cant wait to go tomorrow to Anaheim and watch the fights.

If you are a Lawlormaniac, click here to check out and purchase my new limited edition shirt!! http://t.co/IZULtRKv

“@Kingsbu I liked a @YouTube video http://t.co/hPqIG2x8 UFC on FOX: Silencing the Critics”

thanks for everything. tbe place is amazing! “@ClinchGear Hard not to love your job when people (cont) http://t.co/poXoReMi