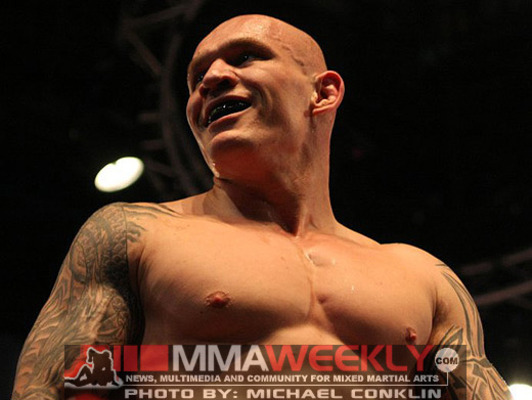 Krzysztof Soszynski is ineligible for regional rankings due to inactivity.
Fighters must have at least one completed MMA bout in the past two years to be ranked.

Since turning professional in 2003, Polish light heavyweight fighter Krzysztof Soszynski, a former body builder, has competed in some of the top MMA organizations in the world against some of the top competition in the world.  Soszynski started his MMA career 20 - 9 before he got his shot in the UFC via The Ultimate Fighter.

The Polish Experiment would would make it into the TUF house winning his first two bouts, however, he would succumb in the semis to Vinny Magalhaes via arm bar in the very first round.  After the show, the UFC kept Soszynski around and gave him a fight on the finale of the show, where he would win submission of the night over former cast mate Shane Primm. Krzysztof Soszynski would go on to win 6 of his 9 UFC bouts, defeating the likes of Brian Stann and Stephan Bonnar.

Although Soszynski prefers to stand and strike with his opponents, he is perhaps more skilled on the ground than he is on his feet, having won Submission of the Night honors for Kimura locks in back-to-back appearances in the UFC in 2008-2009. Also unique in Soszynski's arsenal is his propensity to stand in an unorthodox, squared-off stance.

Krzysztof Soszynski was scheduled to face Ednaldo Oliveira at UFC on FX 6 in December.

Episode 9 Soszynski def. Kyle Kingsbury by Armbar at 2:36 of Round 1

Episode 12 Vinny Magalhaes def. Soszynski by Armbar at 3:45 of Round 1