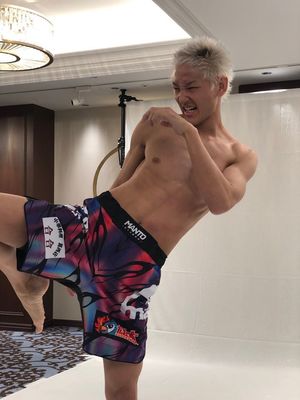 Fighting for a major organization has made Ulka Sasaki ineligible for regional rankings.

Ulka is a Bantamweight fighter having fought most of his career for Shooto. He is a highly regarded prospect, while his all around game is respectable it is his grappling that he is most known for having qualified for the 2013 ADCC World Championships and half of his wins coming by submission. He is often seen wearing a Tengu mask, especially during his walkouts, this mask is where he gets his nickname from as Ulka means Tengu (long nosed goblin) in Sanskrit. He holds notable victories over Keisuke Fujiwara, Kota Onojima, Hadairo, Yoshifumi Nakamura, and Yo Saito.

Ulka has been training Jiu Jitsu since a kid and wrestled 3 years in high school. He decided to start MMA after watching Gomi in PRIDE and wanted to be like him. Ulka won the Shooto Pacific Rim Featherweight Title by knocking out Kenji Yamamoto in 11 seconds. A short time later he vacated the title so he could pursue a World Title. He would win 4 more fights before the UFC took noticed and signed him to fight Roland Delorme at UFC Fight Night 48 in Macau, China. Saski would impress in his debut sinking in a rear naked choke in the very first round to not only pick up his first UFC win but a Performance of the Night bonus as well.

In his spare time Ulka enjoys drawing and traveling. When he was younger he would watch pro wrestling with his brother and thoughts that what he wanted to be until he saw Takanori Gomi for Pride and realized MMA is what he wanted to do.