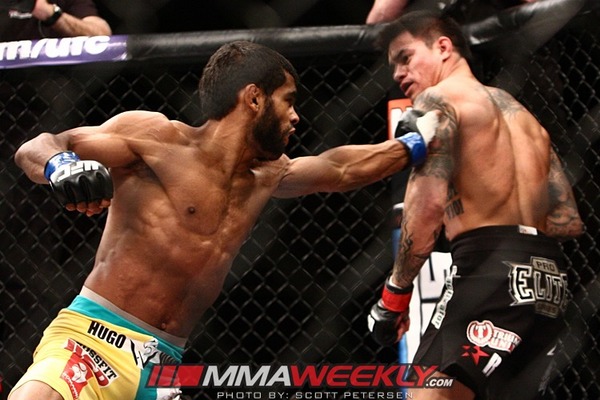 Hugo Viana is ineligible for regional rankings due to inactivity.
Fighters must have at least one completed MMA bout in the past two years to be ranked.

Hugo Viana is a Brazilian bantamweight fighter currently signed to the UFC. He is a purple belt in Brazilian Jui Jitsu and a black belt in Tae Kwon Do and trains out of Champion Team in Salvador, Brazil. He was a cast member of The Ultimate Fighter: Brazil. He has notable wins over Reuben Duran and John Teixeira. Of his eight wins, only one has been a finish which came via T/KO.

Viana began training in mixed martial arts in 2010 after competing in Tae Kwon Do for several years. After a 1-0 amateur career, he made his professional debut on May 26, 2010 against Marcelo Santos, winning by unanimous decision. After accumulating a record of 5-0, Viana was selected for the debut season of The Ultimate Fighter: Brazil.

On the season's first episode, Hugo defeated Alexandre Ramos via first round TKO to move into the house.  He was selected as the second pick by Vitor Belfort, to be a part of Team Vitor. In the first round of the tournament, Viana fought Marcos Vinicius of Team Wanderlei and won a close unanimous decision. In the semi-finals, Viana fought Rony Jason, losing the fight via unanimous decision, eliminating him from the tournament.

After the show, Viana was retained by the promotion and made his UFC debut at UFC 147, against John Teixeira, at a 150 pound catchweight. He was awarded a split decision victory. His next fight was his debut at bantamweight against Reuben Duran, which Viana won by first round KO. He was originally scheduled to take on Francisco Rivera, but an injury would force Rivera out and he was replaced by TJ Dillashaw. He would suffer his first loss at the hands of Dillashaw, who was able to finish him by TKO in the first round of their fight at UFC on Fox 7. He was set to fight Johnny Bedford at UFC Fight Night 28, but an injury forced Bedford off of the Card. He was replaced with Wilson Reis, but when Viana himself was injured, the bout was removed from the card completely. Hugo next faced Ramiro Hernandez at UFC on Fox 10 and despite slowing down in the third round, he heavily outstruck his opponent over the course of the fight and he was able to take home a comfortable unanimous decision victory.

Episode 1 Viana def. Alexandre Ramos by TKO in Round 1