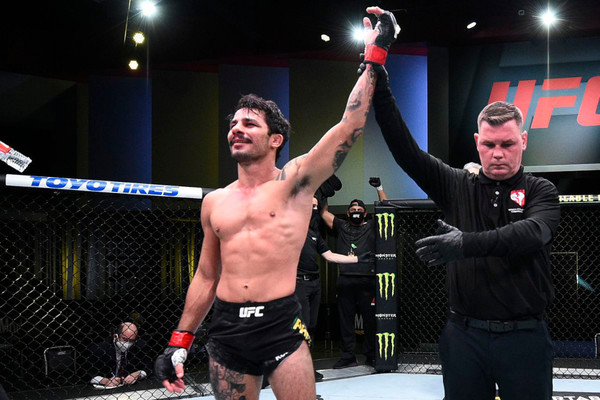 Fighting for a major organization has made Alexandre Pantoja ineligible for regional rankings.

Alexandre Pantoja Passidomo was born on the 16th of April 1990 in Rio de Janeiro, Brazil. Pantoja currently fights out of American Top Team, a gym he has been affiliated with since 2019.

Pantoja made his professional MMA debut on the 21st of July 2007 in a bout against Antonio Carlos, Pantoja would win his debut by armbar submission in the first round. Pantoja would compete in the regional scene and promotions like Shooto Brazil up to 2015. Notable achievements from this period in Pantoja's career include winning the RFA Flyweight Championship and the inaugural AXS TV Flyweight Superfight Championship.

In 2016 Pantoja would participate in The Ultimate Fighter 24, Pantoja would beat current UFC Flyweight Champion Brandon Moreno in the first round of the show by submission in round 2. In the quarter-final Pantoja would win his bout with Kai Kara-France by unanimous decision before losing the semi-final against Hiromasa Ougikubo.

Pantoja's performance on The Ultimate Fighter 24 would earn him a UFC contract and Pantoja would make his UFC debut in 2017 against Eric Shelton, Pantoja won this contest by split decision. After over 4 years, 10 fights and 7 wins Pantoja remains one of the top contenders in the UFC Flyweight division, at the time of writing this wiki Pantoja is ranked #3 according to the UFC website and has a professional MMA record of 23-5 (7-3 in the UFC).

Norbert Novenyi Jr. is 23 today! Send him a Tweet.