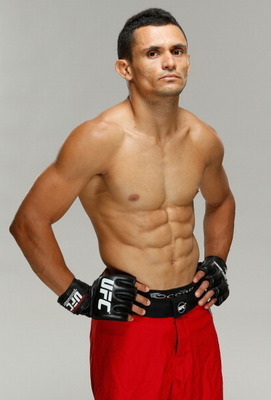 Fighting for a major organization has made Douglas Silva de Andrade ineligible for regional rankings.

Douglas Andrade is a Brazillian featherweight fighter currently signed to the UFC. He trains out of Castanhal, Para, Brazil. He has previously fought for Amazon Fight, Shooto Brazil, and Jungle Fight. Of his twenty two professional wins, nineteen have been finishes including eighteen T/KOs. He was unbeaten in his twenty three fight, seven year career before joining the UFC

Andrade began his professional career in 2007 with a TKO victory. He would go on to a No Contest in his second fight and took an eighteen month break from competition. He returned in 2009 for the Super Pitbull Fight promotion. After winning a submission and a decision victory with the promotion, he would go on a ten fight streak where all of his wins came by T/KO. After two more decision wins, he would go on another seven T/KO streak, this time in the major Brazilian promotions.

In early 2014, Douglas was signed by the UFC. He made his promotional debut against fellow debutant, Zubair Tuhugov, at UFC Fight Night 36 in Brazil, but would lose for the first time in his career when he came up on the short end of a unanimous decision.

Coming in as an underdog, Andrade secured his first UFC victory, when he defeated Cody Gibson via Unanimous Decision at UFC Fight Night 61: Bigfoot vs. Mir.