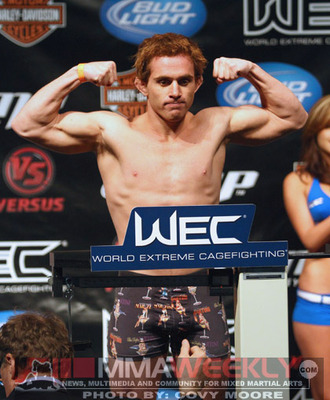 Anthony Leone is ineligible for regional rankings due to inactivity.
Fighters must have at least one completed MMA bout in the past two years to be ranked.

Anthony Leone is a professional Mixed Martial Artist from Long Island, New York. He is a bantamweight currently contracted to Bellator Fighting Championships and One FC. Based in Phuket, Thailand, Anthony finally gets the opportunity to train full-time with his younger brother, fellow wrestler and One FC and Road FC flyweight Andrew Leone. The duo are looking to become a major force in Asian fightsport, as professional Mixed Martial Artists and jiu jitsu players.

Anthony was a silver-medallist at the Pan-American Games in no-gi jiu jitsu. The wrestler and jiu jitsu player brought strong grappling credentials with him into his Mixed Martial Arts career, and embarked on an eight fight winning streak before the big promotions took note and snapped up the youngster, then based in Hawaii at BJ Penn’s Academy.

With a career ledger of 11-5, Leone has gained a lot of experience fighting in top tier organizations such as Bellator, WEC and Strikeforce. His style of combining wrestling with submission grappling is an entertaining one, and approximately half of his wins in professional and amateur competition have come via submission. After compiling an 8-0 record fighting around the New York and Massachusetts area, with four decision wins, four submission victories, the Long Islander was finally snapped up by a big American promotion on the world stage when World Extreme Cagefighting (the WEC, a sister organisation to the Ultimate Fighting Championship and where the UFC then held its lower weight fights before absorbing it) signed him to a fight. Leone lost an entertaining battle with Renan Pegado, that ended by submission in the third round.

A slew of fights in Bellator Fighting Championships and Strikeforce followed, and after a dismal 1-5 run Leone resolved to show bounce back ability and return strong. That he did, as the grappler rebounded with three straight wins including an upset of former Bellator Bantamweight Champion Zach Makovsky. Following these wins, the Team Bomb Squad member decided to relocate to Phuket, Thailand, to join his kid brother among the ranks at Phuket Top Teamwhere he trains under 3rd degree BJJ black belt Olavo Abreu and black belt Rodrigo Praxedes, plus a Muay Thai program under former Rajadamnern and Lumpinee Stadium fighters and champions.