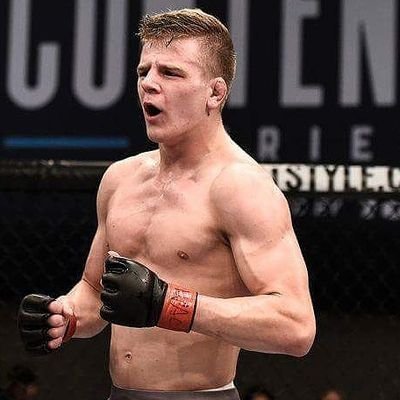 Fighting for a major organization has made Grant Dawson ineligible for regional rankings.

Grant Michael Dawson was born in Cambria, Wisconsin and grew up in Stromsburg, Nebraska. Dawson dreamed of playing professional football and began training wrestling in order to gain a grappling advantage on the gridiron. Eventually, Dawson realized that he was not cut out for football and began taking wrestling more serious. Dawson competed in wrestling at Cross County Community School and finished his senior year with a record of 40-8. Dawson was not interested in going to college due to his dyslexia and was drawn to mma after watching a UFC fight. He began training mma during this time. Dawson is a brown belt in Brazilian jiu-jitsu.

Dawson made his pro mma debut in 2014 after joining Glory MMA and Fitness. He began his career 11-1 alternating between Featherweight and Lightweight and travelling across the Midwestern United States. All 11 wins were finishes and 8 of those wins were submissions.

Dawson appeared on Season 1 of Dana White's Contender's Series and defeated Adrian Diaz by second round rear naked choke. He is 6-0-1 in the promotion with submission victories over Michael Trizano (UFC Fight Night: dos Anjos vs. Lee)(Performance of the Night), Darrick Minner (UFC Fight Night: Benavidez vs. Figueiredo), and Jared Gordon (UFC on ESPN: Font vs. Vera). He defeated Leonardo Santos by KO (UFC on ESPN: Brunson vs. Holland) and went to a majority draw with Ricky Glenn (UFC Fight Night: Costa vs. Vettori). On that night Dawson won the first two rounds but Chris Lee and Ron McCarthy gave Glenn Round 3 by 10-8, while Douglas Crosby had the final tally 29-28 Dawson.

Dawson and his fiancee moved to Florida in 2022 so that he could train at American Top Team. His walkout song is Jonathan Young's cover of "Hellfire" from the Disney animated film The Hunchback of Notre Dame.