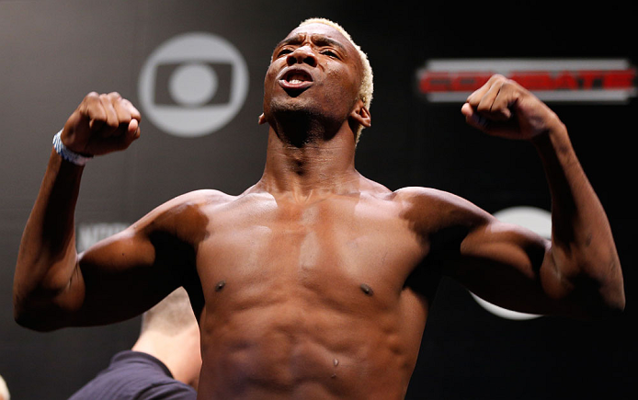 William "Patolino" Macário is a Brazillian welterweight fighter currently signed to the UFC.  He trains out of Team Black House in Rio de Janeiro, Brazil and was a finalist on the second season of The Ultimate Fighter: Brazil.  "Patolino" began his professional career in 2010, fighting in various Brazilian promotions.  He was able to compile a 6-0 record within the first two years of his professional career.  All of Macário's wins were finishes, five TKOs and a submission.

"Patolino" earned a spot on The Ultimate Fighter: Brazil 2 in late 2012.  He won his fight to get into the house by defeating Roberto Amorim by TKO due to cut in the first round and was picked up by Antônio Rodrigo Nogueira as the eleventh overall pick out of fourteen.  In Macário's elimination round bout, he defeated the last overall pick, Thiago "Marreta" Santos by unanimous decision.  He went on to earn a TKO win over Tiago Alves in the quarterfinals and was then matched up with Viscardi Andrade in the semifinals.  "Patolino" was able to score a knockout win in the sudden victory round.  This earned Macário a spot in the live finale at UFC on Fuel TV 10.

In the tournament finale, Macário was originally supposed to face fellow finalist Santiago Ponzinibbio.  However, a hand injury during the semifinals forced Ponzinibbio out of the fight, and he was replaced by the man he defeated in the semifinal round, Leonardo Santos.  Although "Patolino" came out strong in the first round, he quickly tired and was submitted by Santos in the second round by arm-triangle choke.

Following the first loss of his professional career, Macário on Bobby Voelker at UFC 168 in his first bout outside of his native Brazil. Throughout the fight, he showed greatly improved striking and dominated the fight on the way to his first unanimous decision win.  Macário returned to Brazil to face streaking welterweight Neil Magny at UFC 179.  He had a decent showing, but eventually tired again and was finished with ground and pound in the third round.

Episode 1 Macário def. Roberto Amorim by TKO (cut) in Round 1