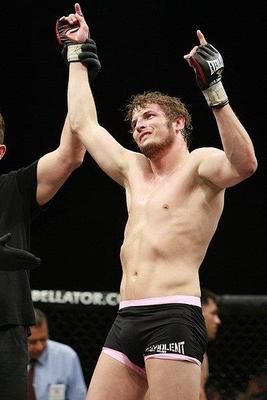 Fighting for a major organization has made Chas Skelly ineligible for regional rankings.

Chas Skelly was born in Bedford, Texas. He began wrestling at a very young age, which he continued into Highschool and University. At Oklahoma City University he earned NAIA All-American honours. He began MMA training when he was a wrestling partner for UFC Bantamweight fighter Johnny Bedford.

Skelly's early career was impressive, with him recording a 8-0 fight record throughout regional promotions in Texas and neighbouring states. And a 3-0 record with the Bellator promotion.

In March 2014, the UFC announced it had signed Skelly and he quickly made his debut with the organization on April 19 at UFC on Fox 11: Werdum vs. Brown, where he faced Mirsad Bektic, who was also making his UFC debut. The fight was close and went to a decision. The judging scored it (29-27, 29-27, 28-28), giving Bektic the victory and Skelly his first lost. Which brought his professional MMA record to 11-1.

On 23 August, 2014 at UFC Fight Night 49: Henderson vs. dos Anjos, Skelly faced Tom Niinimaki. Coming in as a slight underdog, Skelly made quick work of Niiminaki, by submitting him at 2:35 in Round 1 via Rear-naked Choke. Giving Skelly his first win in the UFC.

On 9 September, 2014 at UFC Fight Night 50: Jacare vs. Mousasi 2, Skelly made UFC history when he replaced Andre Fili on short notice to face Sean Soriano and subsequently beat him via Unaimous Decision (all judges scoring the fight 30-27). This win gave Skelly his second win in the span of 13 days, making it the quickest back-to-back win for any non-tournament fighter in UFC history. Being a big Featherweight the toll of doing two weight cuts, the second being on short notice was evident in Skelly's performance by Round 3, but his perseverance allowed him to hold off Soriano. This fight brings his UFC record to 2-1 and overall MMA record to 13-1