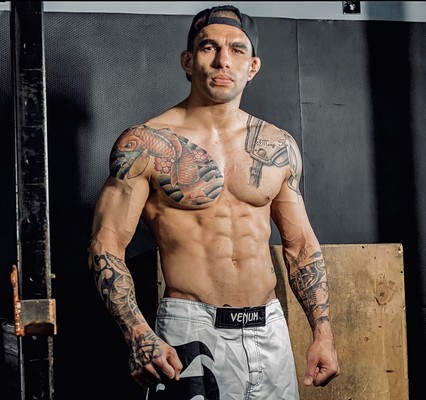 From Montes Claros, Minas Gerais, Lucas "Mineiro" Martins entered in MMA like a rocket. After starting to train in 2010, the muay thai striker from Chute Boxe/Macaco Gold Team won his debut in september 2011 and then fought 11 times in 14 months, winning all the bouts to win a UFC contract. After debuting with a loss in a short-notice fight against Edson Barboza, Lucas Martins knocked out Jeremy Larsen, winning Fight Of The Night honors of UFC On FX 8. Now, the former lightweight is getting ready for his next fight, dropping two weight classes for his debut at the bantamweight division against Ramiro Hernandez. After his victory at bantamweight Lucas has made what seems to be a permanent move to featherweight winning his first bout against Alex White, earning him a unique UFC record. "Mineiro" is the only fighter ever to win three consecutive fights in three different weight divisions.