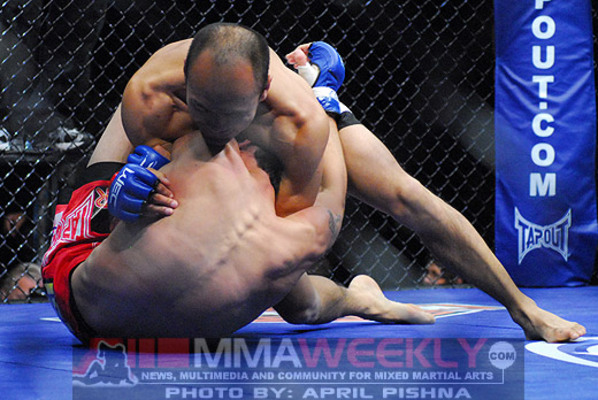 Tiequan Zhang is ineligible for regional rankings due to inactivity.
Fighters must have at least one completed MMA bout in the past two years to be ranked.

A native of China’s Inner Mongolia province, Zhang began training in Wrestling while he was still in elementary school. Shortly after winning the Inner Mongolian Wrestling Championships at the age of 16, Zhang was recruited into one of China’s top Sanda academies, where he quickly established himself as a high-level competitor, winning numerous national titles over the course of his Sanda career. When China’s best Sanda fighters were approached with the offer to begin training and competing in MMA in 2004, Zhang was one of the first to embrace the opportunity, since which he has fought and won all over the world, cementing his position as one of the best MMA fighters in China. Now based out of China Top Team in Beijing and training under Brazilian Top Team’s Ruy Menezes, Zhang has developed a powerful arsenal of Brazilian Jiujitsu skills, with many of his MMA victories coming via submission. In August 2010, Zhang became the first Chinese fighter signed to the WEC, the UFC’s sister organization, where he will again be a pioneer for Chinese MMA on the world stage.

Zhang's mixed martial arts career started off with a bang as he went undefeated in all 13 of his fights in small Asian promotions before making his North American debut at WEC 51 against undefeated submission specialist Pablo Garza who was also making his WEC debut. It only took Zhang 2:26 catch Garza in a guillotine choke which earned Zhang his fourteenth professional win and proving that he was a legit contender in the featherweight division. Zhang's next fight was at WEC 53 which was the promotions final event before merging with the UFC & was matched against Daniel Downes. Zhang almost tapped Downes on two occasions in the first round however after the first Zhang looked like a completely different fighter as he appeared to have almost no stamina left and was picked apart by Downes for the remaining fight time who ultimately took the unanimous decision victory (29-28, 29-28, 30-27) almost submitting Zhang with his offensive Jiu-Jitsu in the second and third rounds. Zhangs next fight would take place in the UFC against 20-1 Jason Reinhardt who had previously competed inside the octagon in a loosing effort against Joe Lauzon. Zhang was able to pull off an amazing guillotine only 48 seconds into the first round proving that he was still a threat at 145. Unfortunately this would be the last time Zhang would have his hand raised inside the octagon as he went on a 3 fight loosing streak which saw him defeated by the likes of Darren Elkins (30-27, 30-27, 30-26 unanimous decision), Issei Tamura (knockout via punch) & Jon Tuck by way of unanimous decision (29-28, 30-27, 29-28). Zhang has not fought since the lost in 2012 & at 38 years old it is very unlikely that he will be making any waves in the UFC as he has struggled against Top 10 guys.