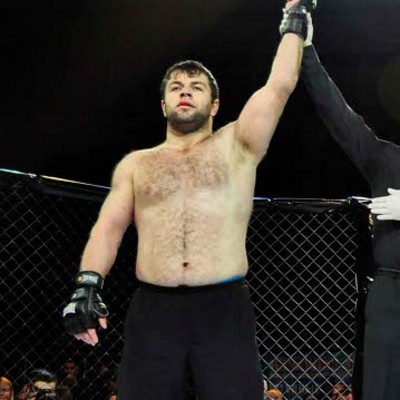 Magomed Malikov is a heavyweight MMA fighter from Dagestan, Russia. He is physically very strong and has decent wrestling skills. But his main argument inside the ring/cage is his brutal punching power. If he connects one time, the fight is over.

Malikov started his carrier 2010 and won the selection stage of Ukranian Association of Martial Arts tourney. 2011 he defeated Dmitry Poberezhets in the finale stage, but lost to more experienced grappler Baga Agaev via Armbar.

In the same year he joined the four man tourney of the Russian promotion Fight Star. He knocked out Alexey Oleinik in the semi-final fight and became tournament champion after unanimous decision win over Yuri Gorbenko.

Then Malikov signed contract with Russian premium promotion M-1 Global and achieved unexpected knockout victory over Aleksander Emelianenko. This win ensured him attention from the media and his success was noticed also outside of Russia. He makes it on the top of BloodyElbow’s World MMA Heavyweight Scouting Report 2012.

In 2012 Malikov lost to Kenny Garner via TKO in the third round and missed the opportunity to gain the M-1 Challenge interim title. At the beginning of the first round Garner refused to shake hands. Malikov realized it to late and with the first punch Garner broke the nose of his opponent, what had impact on the outcome of the fight.

2013 Malikov started in M-1 Grand Prix as one of eight fighters. In quarter finals he defeated Jeff Monson via TKO in the second round. Doctor stopped the contest due to Monson’s cut. Malikov, who is practicing Muslim, wasn’t able to prepare well for the half final fight against Chaban Ka during Ramadan and was forced to leave the Grand Prix. The later tournament winner Marcin Tybura replaced Malikov.

After that fight Malikov took a long break. The contract with M-1 expired and he signed a deal with Fight Nights. This promotion had shown, it can deliver promoted fighters to leading US-American organizations (Vitaly Minakov, Ali Bagautinov, Ruslan Magomedov, also Andrei Arlovski).

And Malikov has the intention to fight in leading promotions. According to multiple sources he was close to sign with UFC, as he lost to Brett Rogers via TKO in the second round. He broke his shinbone while he tried a low kick. The fraction was similar to Anderson Silva’s injury in the second fight against Chris Weidman. Now (January 2015) Malikov is on the mend and eyes a rematch versus Rogers later this year.