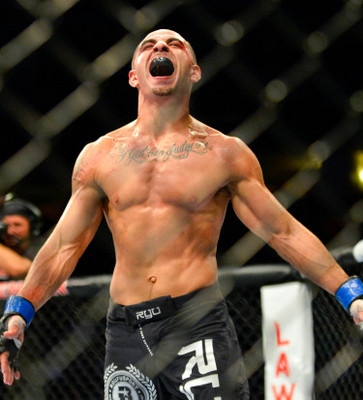 Chico Camus is ineligible for regional rankings due to inactivity.
Fighters must have at least one completed MMA bout in the past two years to be ranked.

Chico Camus is an American bantamweight fighter currently signed to the UFC. He trains out of Red Schafer MMA in Milwaukee, Wisconsin. He has notable wins over Alp Ozkilic, Dustin Pague, and Kyung Ho Kang. Of his fourteen career wins, seven have been finishes including four T/KOs.

Camus began training in MMA in 2007 along with Anthony Pettis. After going 3-0 as an amateur, he made his professional debut in 2009 with a first round submission to strikes. After losing his second fight, he would go on a six fight winning streak with five finishes. He would lose a unanimous decision to WEC and Bellator veteran, Jameel Massouh, in 2010. He would alternate wins and losses over his next three fights. In 2012, he would enter a tournament for Legacy FC that offered a Tachi Palace Fights contract to the winner. He would win his first two round of the tournament, both by decision, but would be forced to drop out of the finals when he was offered a UFC contract.