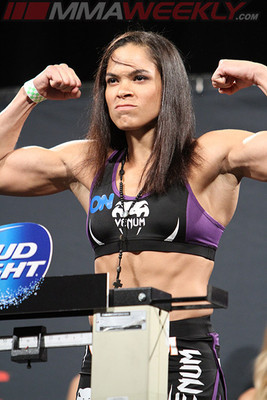 Fighting for a major organization has made Amanda Nunes ineligible for regional rankings.

Amanda Nunes is a female bantamweight fighter and Women's Bantamweight champion and Women's featherweight champion currently signed to the UFC. She was born on May 30th 1988 in Salvador, Bahia , Brazil. She has fought for promotions such as Bitetti Combat, Strikeforce and Invicta FC. She holds notable wins over Sheila Gaff and Julia Budd. Of her ten wins, all have been finishes with nine T/KOs.

Nunes began training in boxing at 16 years old, and started training  BJJ when her sister invited her to a Dojo. She made her MMA debut in 2008, where she was submitted via Armbar in the first round against Ana Maria at Prime MMA Championship 2. She won 5 straight fights via knockout and joined Strikeforce in 2011. She was set to face off against Julia Budd and won via first round KO only 14 seconds into the round. "The Lioness of the Ring" lost her second bout in Strikeforce by a TKO, late in the second round, against Alexis Davis. On 28 July 2008, she met Raquel Pa'aluhi in Invicta 2, and won by RNC in the first round. She would lose her second fight in Invicta to Sarah D'Alelio by decision.

Amanda was expected to face Cat Zingano in Strikeforce, but the event was cancelled. She was then added to the female roster in the UFC when Strikeforce ceased operations. She would make her debut at UFC 163 against Sheila Gaff and would debut in explosive fashion getting, a take down and landing some excellent ground and pound to get the finish early in the first round. She was next set to fight Germaine de Randamie at UFC: Fight for the Troops 3 and was able to quickly get another TKO in the first round. Nunes was expected to fight Sarah Kaufman, replacing Shayna Baszier at The Ultimate Fighter Nations Finale: Bisping vs. Kennedy. However, Nunes pulled from the fight due to a dislocated thumb.

Nunes would then fight Cat Zingano at UFC 178 on the 27 September, 2014. She would lose by TKO in the 3rd round. She looks to bounce back against Shayna Baszler at UFC Fight Night 62.

July 6 2019 Holly Holm was ko'd by  Amanda Nunes who made history when she became the first double champ to return to her original division and successfully defended her original belt.