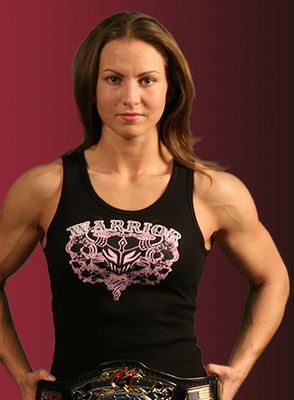 Fighting for a major organization has made Kaitlin Young ineligible for regional rankings.

Young is a former Featherweight and current Bantamweight with a black belt in Taekwondo. She has fought in HOOKnSHOOT, Tuff-N-Uff, EliteXC, and Invicta FC. She holds a notable victory over Miesha Tate.

After a victory in her debut Young entered HOOKnSHOOT's 2007 Women's Grand Prix. She won the tournament impressively with 3 KO's for a total fight time of 1:45, this included a head kick victory over Miesha Tate.

In 2008, Young was chosen as opponent of the then undefeated Gina Carano at EliteXC. At the end of the second round Young was deemed unable to continue by the referee, who as a result declared Carano winner by TKO.

Currently Young fights for Invicta FC in the Bantamweight division. She fought in Invicta's debut event against Leslie Smith. They fought to a draw in a Fight of the Night performance. Young next fought Liz Carmouche. Young would lose by submission in the 2nd round. At Invicta 3 Young got a rematch against Smith, this time losing by TKO in the 2nd round. Young then fought Lauren Murphy at Invicta 5 and Raquel Pa'aluhi at Invicta 9, losing in both cases by unanimous decision.