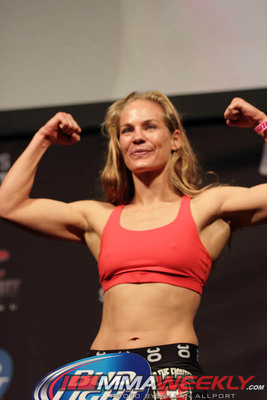 Julie Kedzie is ineligible for regional rankings due to inactivity.
Fighters must have at least one completed MMA bout in the past two years to be ranked.

Julie Kedzie is a retired American female bantamweight fighter. She is a third degree black belt in Tae Kwon Do and trains out of Jackson's Submission Fighting. She has fought for promotions such as HOOKnSHOOT, KOTC, BodogFight, EliteXC, ShoXC, Jackson's MMA Series and Strikeforce. She holds notable wins over Sarah D'Alelio and Kaitlin Young. She has a Bachelors degree in English Literature from Indiana University. Of her sixteen career wins, six have been finishes with equal numbers of submissions and T/KOs. Kedzie also does announcing for Invicta FC.

Julie began martial arts training while still in school and took odd jobs to pay for her training. She would make her professional debut with HOOKnSHOOT in 2004, but would go 1-2 in her first three fights. She took part in the 2005 HS Women Grand Prix and was able to pick up a submission and two decisions in one night to win the eight woman, one night tournament. Over the next two years, she would fight in various promotions throughout the US compiling a 8-5 record. Kedzie was chosen to take on Gina Carano in EliteXC in what would be the first ever televised women's MMA fight. She would lose by decision, but her fame would soar. She continued to fight constantly and by 2009, she had amassed a 16-9 record as well as the Jackson's MMA Series women's bantamweight championship.

Kedzie would be signed to Strikeforce in 2001. She was set to make her debut for the promotion against Amanda Nunes, but her opponent had to withdraw due to injury and the bout was scraped. She instead made her debut against Alexis Davis at Strikeforce: Fedor vs. Henderson, which she would lose via a unanimous decision. She was expected to take on Germaine de Randamie at Strikeforce Challengers 19, but an injury sidelined her for more than a year. She made her return against Miesha Tate at Strikeforce: Rousey vs. Kauffman. Although the fight was a close, back and forth battle, Julie would be submitted by an armbar in the third round.

In early 2013, it was announced that Julie had been signed by the UFC. She made her promotional debut against Germaine deRandamie at UFC on FOX 8: Johnson vs. Moraga. She would end up losing the fight by split decision. Kedzie was set to take on Alexandra Albu at UFC Fight Night 33 in Australia but Albu had to withdraw due to injury. The undefeated Brazilian newcomer Bethe Correia stepped in as a late replacement and ended up defeating Kedzie via a Split Decision in a back and forth battle.

Following the loss to Correia in December 2013, Kedzie announced her retirement from the sport of MMA and just 11 days later it was announced that Kedzie has been hired as a head matchmaker for the all-women's MMA promotion Invicta Fighting Championship as well as continue working as a colour commentator, which she has been doing since the promotion's very inception.