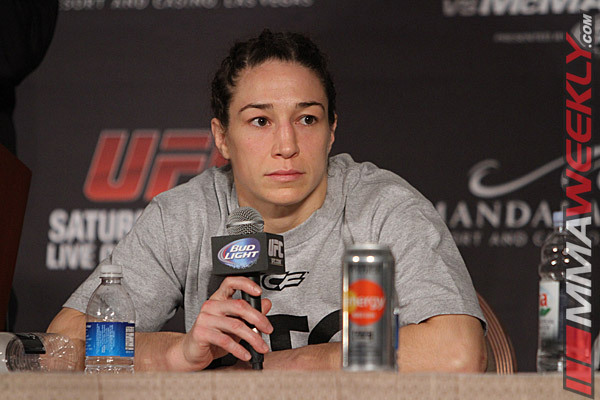 Fighting for a major organization has made Sara McMann ineligible for regional rankings.

Sara McMann is the first American woman in history to receive a silver medal in women's wrestling, which she won at the 2004 Olympics in Athens. After McMann won the medal she kept competing in several wrestling tournaments with great success. With her excellent base in wrestling she decided to transition to MMA and started competing there in May of 2011. McMann went on to a 5 fight win streak after her debut and is still unbeaten in her young career. On September 4, 2012, it was announced McMann has signed with Strikeforce and is expected to meet Liz Carmouche inside the cage on November the 3 in Oklahoma. However the fight would never take place as McMann was injured and then Strikeforce eventually folded.

She signed with the UFC and would make her debut at UFC 159 against Sheila Gaff. She would use her wrestling to get the fight to the ground and would finish Gaff with strikes from the crucifix position. The win would earn her the chance to face off against a fellow Olympian and attempt to hand Ronda Rousey her first loss when they faced each other at UFC 170. Both grapplers came out swinging, with Rousey quickly clinching on the fence. Ronda was able to land a knee to Sarah's liver which dropped her. After two more shots on the ground, referee Herb Dean stopped the fight giving McMann her first loss. The stoppage was controversial since McMann appeared to be still defending herself and attempting to stand up.

She would bounce back with a Split Decison over Lauren Murphy before losing for the second time in her career this time by Majority Decision to Miesha Tate.