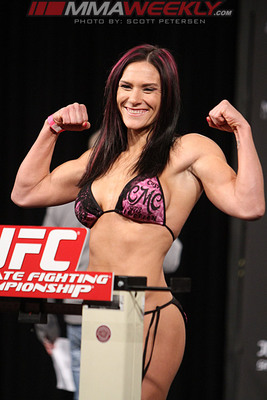 Fighting for a major organization has made Cat Zingano ineligible for regional rankings.

Zingano would fight once for Invicta winning by submission over Raquel Pennington before being signed to the UFC. Zingano would become the first mother to fight in the octagon and the first woman to win by TKO when she defeated Miesha Tate in the third round at The Ultimate Fighter 17 Finale. Zingano was scheduled to be one of the first women to coach The Ultimate Fighter along with Ronda Rousey. The show would feature both men and women in the house and Zingano was supposed to get a title shot against Rousey after the show. However she would tear her ACL and was removed from the show with Miesha Tate stepping in to take her place.

Zingano faced Amanda Nunes at UFC 178: Johnson vs. Cariaso. After nearly being knocked out in the Round 1, Zingano would dominate the next 2 rounds, eventually finishing Nunes via KO at 1:21. This victory earned Zingano a title shot against Ronda Rousey.

In a highly anticipated fight, Zingano faced Rousey at UFC 184 to many fans' surprise the fight was 2 seconds shorter (0:14) than Rousey's previous victory over Alexis Davis. Immediately Zingano charged Rousey and attempted to knee her. Rousey caughter her knee and took Zingano down. With Rousey's transition, Zingano left her arm exposed. Rousey took advantage of this and grabbed her arm and finished her with a unusual armbar known as a wrong way armbar.