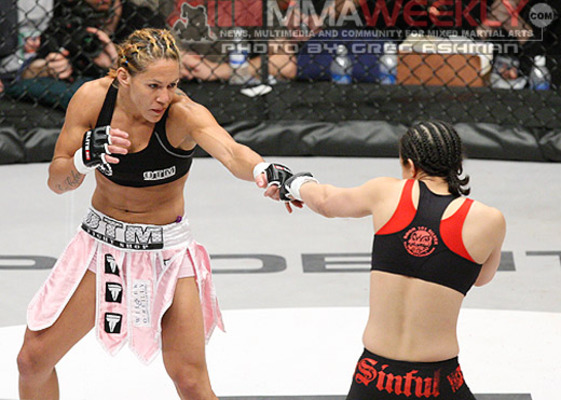 Fighting for a major organization has made Cris Cyborg ineligible for regional rankings.

In a sport dominated by male athletes, Cristiane “Cyborg” Santos holds her own as one of the most ferocious and intimidating fighters of either gender. She is, put simply, female MMA's version of Wanderlei Silva, striking fear into opponents with a combination of superior power and reflexes, intimidating cage persona, and ruthless Muay Thai.

Though she lost her debut in 2005 by submission, it remains Santos's only professional loss. She went on a nine-fight winning streak thereafter, defeating notable female fighters Shayna Baszler, Hitomi Akano, and Yoko Takahashi. That impressive winning streak earned her a shot against the face of women’s MMA, Gina "Conviction" Carano. After a pre-fight buildup unprecedented in women's MMA history, "Cyborg" became the first woman to defeat Carano in professional competition, outmuscling and stopping her with strikes on the ground at the first round buzzer. Santos seized the Strikeforce 145 lb. Women’s Championship in August of 2009 in that watershed bout, the first major televised MMA event to be headlined by female fighters.

Santos has finished the vast majority of her professional fights by knockout or TKO. Training at the famed Chute Boxe Academy in Curitiba, Brazil, and the ex-wife of fellow professional MMA fighter Evangelista Santos, Santos utilizes punishing top control, aggressive striking, and the most physically imposing physique in women’s MMA. She earned her “Cyborg” moniker because of the frenetic pace she keeps in her fights, breaking an opponent's will through sheer aggression and physical dominance before finishing the fight in the latter rounds. Following the Carano bout, "Cyborg" has become one of female MMA's biggest stars.

Following a 16 second TKO over Hiroko Yamanaka it was revealed that Santos tested positive for an anabolic steroid. The match was ruled a No Contest and Santos had her license suspended for a year. There were talks about of setting up a match between Cyborg and Ronda Rousey when she returns to the ring but so far nothing has materialized, mostly because the parties involved couldn't agree upon the weight the fight would take place. Santos does not want to drop down to 135 and Rousey does not want to go up to 145 so it remains to be seen if they can make it work for this fight.

On February 15th 2013 it was confirmed that Santos had signed with Invicta FC. She faced Fiona Muxlow at Invicta FC 5 in April 2013. Right from the start the enraged Cyborg bombarded clearly overmatched Muxlow with hard strikes all over the cage and on the floor. To the credit of Muxlow, who didn't managed to put together any offence whatsoever, her toughness made her withstand the beating until the referee, Big John McCarthy, decided to stop the fight and physically removed Cyborg from the battered form of Ms. Muxlow at 3:46 in the first round. Cyborg was back. In the post fight interview she expressed her desire to fight again very soon and that many people will come to watch and enjoy the massacre.

After going undefeated for thirteen years Cyborg finally lost by tko (punches) in round 1 to Amanda Nunes at UFC 232.