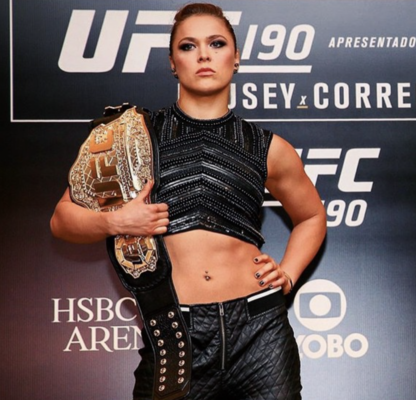 Ronda Rousey is ineligible for regional rankings due to inactivity.
Fighters must have at least one completed MMA bout in the past two years to be ranked.

Take a look at some of Ronda Rousey's career stats ahead of UFC 168.

She began her MMA career as an amateur in 2010 quickly finishing all 3 of her opponents in under a minute via armbar. She made her professional debut in March of 2011 and again continued her winning ways. She would defeat Charmaine Tweet and Ediane Gomes using the armbar again on her way to signing with Strikeforce. She would finish her first 2 opponents in Strikeforce in the same manner in under a minute making quick work of Sarah D'Alelio and Julia Budd. These impressive wins would earn her a title shot against the bantamweight champion Miesha Tate. Rousey would once again use the armbar technique to win this fight and take home the belt. She would make her first title defense against Sarah Kaufman again winning by armbar once again in under a minute. Following the victory, she has been vocal regarding a request to fight former Strikeforce Featherweight Women's Champion Cristiane "Cyborg" Santos although many doubt the practicality of this request since a cut to 135 lbs would be very difficult for the aforementioned Santos.

Rousey recently became the first woman to sign a contract with the UFC. She is now scheduled to face Liz Carmouche in the first ever women's fight in the UFC. The bout is scheduled to take place at UFC 157 in Anaheim, California and it will be the main event on the card. Liz would put Rousey in a little trouble early getting her back and trying for the rear naked choke but Rousey would fight through it and one again pull off an armbar for the win with 11 seconds left in the first round.

Ronda would coach the Ultimate Fighter 18 season, her original opponent was Cat Zingano who had to pull out with a knee injury. Her opponent instead would be Meisha Tate which would help fuel the rivalry. The two would face off for the second time on December 28th at UFC 168. Tate would be the first one to bring Rousey out of the first round however the result was still the same as Rousey was able to sink in another armbar in the 3rd round to defend her title for a third straight time. The fight would also earn Rousey Submission of the Night as well as Fight of the Night. She defended her title against another former Olympian in Sara McMann at UFC 170. Both grapplers came out swinging, with Rousey quickly clinching on the fence. Ronda was able to land a knee to Sarah's liver which dropped her. After two more shots on the ground, referee Herb Dean stopped the fight giving Rousey her first TKO victory. The stoppage was controversial since McMann appeared to be still defending herself and attempting to stand up.

In addition to her MMA career Rousey has also had a go at Hollywood appearing in the Expendables 3 movie and Fast & Furious 7.

She also appears on the show entourage.

Rousey would finally face Cat Zingano at UFC 184. Once again Rousey would prove she is the best in the division finishing Cat in only 14 seconds setting a UFC record for fastest submission finish in a title fight. She would also earn a Performance of the Night bonus making it her fourth straight fight with a bonus.

At UFC 190 Rousey would defend her bantam weight title against bethe Correira. Rousey won the fight in 34 seconds by TKO.

Her next title defense was against Holly Holm at UFC 193. Holm won the fight in a stunning upset knocking out rousey in the second round with a head kick and punches. It was the first loss of rousey's career. Rousey took a year off to recover after the tough loss.

UFC 207 just shy of one year later saw Rousey make her return to the octagon. However Rousey would not face holly holm for the rematch as Holm was no longer the champion having loss to Rousey's long time rival miesha tate. Tate in turn having lost to Amanda the lioness Nunes. Nunes dominated the fight overwhelming rousey with punches. Rousey received her second consecutive loss by TKO.

Ronda next made a surprising move by joining world wrestling entertainment (WWE) where she has achieved great success becoming one of the most popular wrestlers and becoming the womens champion.