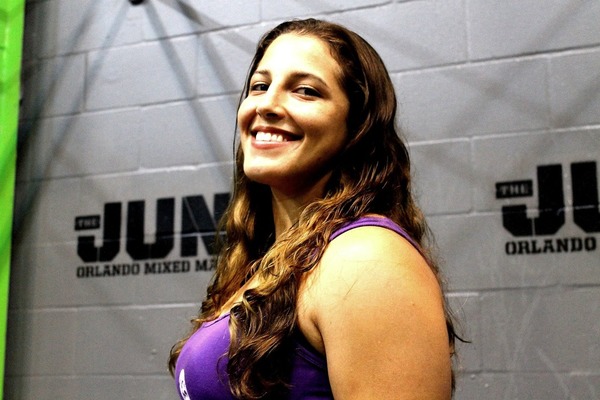 Fighting for a major organization has made Felicia Spencer ineligible for regional rankings.

Felicia "Feenom" Spencer is a sixth grade math teacher as well as an MMA fighter.  She has a background that boasts black belts in both Ju-Jitsu and Tae Kwon Do.  Previous to turning her attention full time to MMA she also trained in kick boxing.  In the cage however it is her grappling and ground and pound that seem to be her go to discipline as all of her finishes have come either by way of rear naked choke or punches and elbows after securing  top control and dominance.

She turned pro after a 5-1 amateur record and signed with Invicta FC. She cut her teeth with the organization winning her first five bouts in dominant fashion, thee by way of KO or Submission and the other two by unanimous decision. Setting up for a shot at the vacant featherweight belt against Pam Sorenson. She secured another submission in round four showing her stamina and proving even in championship rounds she remains a threat to end the fight.

Rather than defend her title she chose to test herself at the highest levels opting to sign with the UFC.   A  matchup with fellow prospect Megan Anderson offered a unique challenge as Megan towers most competitors cutting an imposing stature of 6 feet tall.  The fight was booked as kind of a formality so that Felicia could prove she was on the same level as her new peers whom the world  generally consider to be the absolute pinnacle of the sport.  Though the top two featherweights (Cyborg and Nunes) both had previously  fought for Invicta FC (Cyborg held the same title as Spencer), clearly the depth of talent and competition was a step below. If she performed as expected unofficially her next bout would likely be for a title eliminator match.  Spencer wasted little time in dispatching her giant opponent.   After introducing themselves to one another via straight rights and jabs the two decided to have a private intimate conversation along the fence.  Even though technically it's anybody's guess how their banter went due to the whisper close proximity, I will go ahead and take the liberty of inserting my best effort to recreate the most probable dialogue.  Mmmm... here it goes.  "Well hello my little friend fancy meeting you.  Sure is a lot of canvas in this here octagon, was thinking of taking a stroll.   Want a piggy back so you don't fall behind?   How bout ya just shimmy up on me's backside and we can play a little ro-de-o.   Why I think I would like that very much but first let me knee you a few times to celebrate us being new besties.   At which time Spencer climbed on like a drunk girl at the country bar riding the mechanical bull who just refuses to let go.  She may not have got performance of the night but I like to think somewhere Legolas came off of his couch with a tear in eye and threw a elven gangster v hand gesture....or  whatever.   Spencer aka "suburban spider monkey"  realized her pony must be exhausted so she decided they should take a nap.   Meagan was having trouble sleeping so Spencer aided her new friend by inserting the knife edge of her forearm under the chin at around the three and half minute mark of roundo numero uno.

Faithfully executing her duties in impressive fashion Spencer was rewarded (if you can call a date with a wood chipper a reward) a matchup with none other than previous title holder and all round bad ass Cristiane Justino Venancio.  Better know by her nickname Cyborg, naturally as all apex predators are known by a simple single name.  The scheduling of the fight was a bit unexpected as many people were shocked a rematch between Cyborg and  Amanda Nunes had been squashed by Dana White.  White stated that Cyborg had turned down the offer.  Cyborg vehemently denied White's rendition and stated the real issue was a longstanding grudge White had for her from before she had signed with the UFC.  Whatever the case the turn of events could serve to be just the springboard Spencer needed to catapult her into the conversation of all MMA fans come Monday at watercoolers around the world,  A sure path to lucrative endorsements, statues of her likeness casted in her home town, rose pedal spreader people spreading rose pedals wherever she walked.  Okay well let us not get to ahead of ourselves after all Cyborg is named Cyborg for a reason.  She is well a frickin Cyborg and unless your Amanda G.O.A.T. Nunes you have a  80% chance of adding yourself to a sixteen name long list of ladies forgetting what they had for lunch come fight day.  So a massive underdog took the ring to stamp her place in women's MMA lore and in a way she kind of did.  Spencer became only the fourth person to ever hear that beautiful high pitched clang indicating the match is over and so is the beating.  Gritty should be Spencer's nick name because she is like a zombie.  She just does not have an ounce of quit in her.   After giving the ex-champ more than she could have imagined, leaving Cyborg bleeding profusely from a deep laceration on the forehead in round one she continued her bull dog manner and made it an ugly clinch battle for a good part of the second round.  However Cyborg had landed enough bombs to win both rounds.  Needing a finish one almost materialized in the third but unfortunately Spencer found herself on the wrong end of a one sided beat down barely hanging on and would have to settle for a moral victory.  Her valor was appreciated by a standing only crowd who definitely took notice of her surprising performance and so did the UFC.  The war only served to build her brand.  The following matchup found her back to more familiar conclusions, rebounding with a first round KO stoppage.  Spencer was now on a collision course with the current champ and fellow former Invicta FC title holder the Lioness Amanda Nunes.

Standing in Spencer's way on her quest for greatness stood none other than the best female to ever compete in mixed martial arts Amanda "the Lioness" Nunes.  Nunes had already cleaned out the division below.  Becoming the first and only woman to hold belts in multiple divisions.  She also holds the distinction as the only person man or woman to not just earn but also defend those chamionship straps.  Defeating a who is who list along the way that includes the likes of Chris Cyborg, Ronda Rousey, Miesha Tate, Valentina Shevchenko (twice), Holly Holm, Rachel Pennington, and Germaine de Randamie.  The game plan was a simple one for the "Feenom".  Follow the blue print that Cat Zingano had already executed when she handed "The Lioness" her only UFC defeat.  In that bout Cat managed to barely hang on after being mauled the first round and used a grappling heavy strategy to wear out Nunes out, leaving her exhausted and defenseless.  That setback although early in Nunes UFC tenure did seemingly offer a hypothetical path to victory considering that grappling is Felicia's strongest asset.  Even though Felicia is considered to have some power in her striking it was presumed her best and perhaps only chance of victory hinged on her ability to get the bout to the ground, avoid the early onslaught that is the champs MO and drag the match into the deep waters of the championship rounds.  Hoping Nunes would drown in a sea of lactic acid.  It must be noted however Nunes had displayed a remarkable perhaps even eye raising cardiovascular complete transformation.  One that had seen the fatigue prone quick muscle twitch athlete morph into the nightmare inducing almost mythical goddess of destruction seemingly with no weaknesses we know today.  This ability to match and often surpass the endurance of her competitors was the catalyst that marked her rise to dominance.  If Spencer should fail the skin covered bones Nunes uses to wield at her opponents like mini anvils would make for a miserable night.  Those same sledge hammers caused previous self proclaimed  "baddest woman on the planet" Rhonda Rousey as well as Miesha Tate both to consider alternative occupations.  No surprise the odds makers predicted a lopsided affair with some of the lines ballooning to -700 prefight.  Turns out bookies know what the hell their doing as it quickly became apparent that while Spencer is tougher than your mother in laws overcooked steak dinner (which we already knew) she had virtually no tools that would allow her to be competitive.  Her physical tangibles were badly outmatched in every category.  It became a little hard to watch in the championship rounds as it seemed she was only fighting for pride.  Many people criticized her corner for allowing the pointless bludgeoning to continue long after the point where any realistic chance for a path to victory had vanished.  But give Nunes credit she could have taken her out probably in the later part of the first round and certainly by the third as she had obviously damaged Spencer with a vicious leg kick in the first and a ruthless body shot in the third but let her off the hook both times abandoning the sure path, favoring instead for uncharacteristic single counter strikes and grappling exchanges that cost many of bettors their hard earned money.   As they watched helplessly the rounds and their cash tick away.  The fight did eventually result in a suspicious judges decision.  Perhaps she was showing mercy admiring Spencer for her toughness or perhaps she was doing the casino a solid one.  Either way Spencer may not get another opportunity for a belt as the division itself is only around to award Nunes for her greatness as Dana has openly stated and will probably be dropped when she retires unless someone can pick up the torch Amanda has carried thus far.  I certainly hope so as the 145 pounders need to have an opportunity to fight for the top organization without killing themselves to make batam weight.  The fans will ultimately decide i guess.

Spencer dropped her next bout by split decision set to try and rebound from her failed championship bid when she takes on Norma Dumont a replacement for the UFC debut of the highly boxer turned MMA fighter Danyelle Wolf.