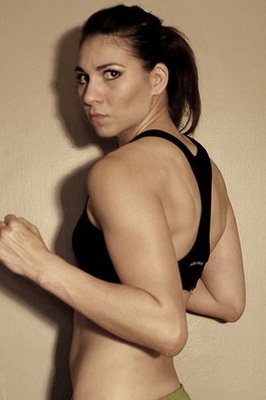 Fighting for a major organization has made Irene Aldana ineligible for regional rankings.

Irene "Robles" Aldana is a Mexican mixed martial artist who competes in the Bantamweight division. As January 20, 2020, she is #5 in the UFC women's bantamweight rankings.

Aldana was born in Culiacán, Sinaloa, Mexico. She was a physically active child who went to the gym regularly for dance and spin classes. As an adult she moved to Guadalajara to study graphic design and ended up discovering Lobo Gym through a friend. She began training at Lobo in 2010 as a means of becoming physically active again.

Aldana made her MMA pro debut without having a single amateur fight. She went 3-0 in Mexico before facing Larissa Pacheco at Jungle Fight 63 for the vacant Women's Bantamweight belt. She would lose to Pacheco by TKO. Aldana would then go 4-1 in Invicta with two wins by rear naked choke and two wins by TKO, her only loss being a TKO to Tonya Evinger.