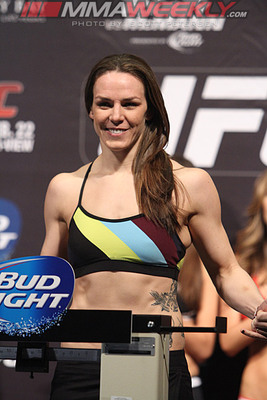 Fighting for a major organization has made Alexis Davis ineligible for regional rankings.

Alexis Davis is a female Canadian bantamweight fighter currently signed to the UFC. She has black belts in both Brazillian Jiu Jitsu and Japanese Jujutsu and trains out of Team Cesar Gracie in Port Colborne, Ontario, Canada. She has fought for promotions such as Extreme Challenge, Strikeforce, and Invicta FC. Davis holds notable victories over Julie Kedzie, Amanda Nunes, Shayna Baszler, Rosi Sexton and Liz Carmouche. She also holds a Canadian Open grappling crown. Of her sixteen career wins, nine have been finishes including seven submissions. She has never been submitted.

Davis' first professional fight in 2007 was a tough one as she was pitted against future Strikeforce champion, Sarah Kaufman. She was defeated by TKO in the third round of that fight, but would bounce back with a six fight win streak. In 2010, she would face fellow grappling ace, Shayna Baszler. Unfortunately Davis lost this fight by decision. After a few alternating wins and losses, Alexis would be signed by Strikeforce in 2011. In her debut with the promotion, she was able to take another grappling specialist, Julie Kedzie, to a decision victory. She next handed Amanda Nunes her first knockout before losing again to Sarah Kaufman, this time by decision.

In 2012, Davis made her debut in the all women's promotion, Invicta FC. She was able to hand Japanese judoka, Hitomi Akano, her first submission loss in her twenty-eight fight career. She next rematched Baszler at Invicta FC 4. Davis was able control much of the fight this time and eventually submitted Baszler with a rear naked choke in the third round. This fight earned both fighters "Fight of the Night" honors.

In 2013, Davis would sign with the UFC and would make her debut against Rosi Sexton at UFC 161. She would win the fight by unanimous decision. She fought former title contender, Liz Carmouche, at UFC: Fight for the Troops 3 and was able to shut down her opponents offense on her way to a unanimous decision victory. She battled Jessica Eye at UFC 170 and was able to pick up a split decision victory. Now riding a 5 fight winning streak she will get a shot at the UFC title held by "Rowdy" Ronda Rousey, when the two square off at UFC 175.