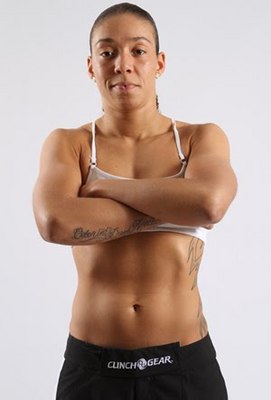 Fighting for a major organization has made Germaine de Randamie ineligible for regional rankings.

Germaine de Randamie is a Dutch female bantamweight fighter currently signed to the UFC. She trains out of the American Kickboxing Academy in San Jose, California. Before her MMA career began, she was a champion in a number of Kickboxing and Muay Thai promotions and holds the record for the most consecutive victories with thirty seven. She has previously fought for Strikeforce and holds a notable win over Julie Kedzie. Of her four wins, she has only finished one which was by T/KO.

Germaine would begin her career fighting around the US and would gain a 1-1 record before being signed to Strikeforce. After a 2-1 record in Strikeforce, she would be signed to the UFC when Strikeforce ceased operations. Her UFC debut was against Julie Kedzie and she was able to pick up a split decision victory. She next took on Amanda Nunes at UFC: Fight for the Troops 3 but was stopped by TKO in the first round. After being sidelined with an injury for more than a year, she was set to get back in the octagon at UFC 185 against the 10-1 Brazilian Larissa Pacheco and would look impressive with a second round TKO finish.