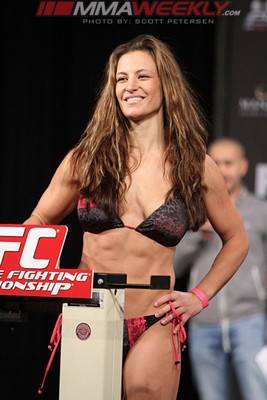 Fighting for a major organization has made Miesha Tate ineligible for regional rankings.

Miesha Tate won the 2005 High School Women's Sate Championship and also won nationals at the World Team Trials. She also won a silver medal in 2008 in the FILA Grappling Championship. While in college at Central Washington University she joined the mixed unconsciousarts club that was run by her current boyfriend Bryan Caraway who would go on to fight in the Ultimate Fighter.

Tate would win in the first round of the HOOKnSHOOT tournament but would lose to eventual tournament champion Kaitlin Young. She would rattle off six wins in a row before being signed to Strikeforce where she would lose her first fight to Sarah Kaufman. She would again bounce back with six wins in a row with a notable win over Zoila Gurgel as well as a win over Marloes Coenen that would earn her the Strikeforce Bantamweight title, submitting Coenen in the fourth round. Her first title defense would come against up and comer Ronda Rousey who would defeat her in the first round by armbar. She would earn a victory over Julie Kedzie in her next match submitting her in the third round by armbar.

In February 2013 Tate signed with the UFC to join the newly created women's 135 pound Bantamweight division. She would debut against fellow newcomer Cat Zingano at The Ultimate Fighter 17 Finale on April 12 with the winner to become the next Ultimate Fighter coach opposite Ronda Rousey. Tate had some moments in the fight where Zingano looked hurt but eventually Cat was able to land some deadly knees to finish Tate in the third round. The bout would earn Fight of the Night honors. However, after Zingano was injured, Tate was instead booked to coach against Rousey on TUF 18 and is would face her in a rematch at UFC 168. She would would again fall short but at least survived until the third round before Rousey was able to get her in an armbar. She will look to get back in the win column against Liz Carmouche at UFC on FOX 11.

Tate would go on to win against Liz "Girl-Rilla" Carmouche at UFC on FOX 11: Werdum vs. Browne on April 19th.  Scores were 29-28 across the board for Tate, who picked up a much-needed victory and regained UFC contender status. Post-fight, Tate was critical of her performance and admitted that she thought that Carmouche might have done enough to win.  Carmouche has now suffered defeats in three of her four UFC fights, but it appears that she may be spared from the UFC cut list for the time being.

Tates next scheduled bout was against undefeated Japanese fighter Rin Nakai. Nakai has an extensive background in Judo and was put to the test against Tate at UFC Fight Night 52: Hunt vs. Nelson on September 20th, 2014. Tate would walk away with the Unanimous Decision. She would follow that up with a Majority Decision over Sara McMann, and a Unanimous Decision victory over Jessica Eye.

On March 5th 2016 Tate took on Holly Holm in a women's bantam weight championship match at UFC 196. Tate who seemed to be losing the fight pulled off a miraculous last round rear naked choke submission which saw holm go unconscious.

Tate's first title defense was against Amanda Nunes at UFC 200. Tate lost the championship by rear naked choke in round one.

Her next fight was against Raquel Pennington at UFC 205. Tate lost the fight by unanimous decision. In the post fight Interview Miesha Tate officially retired from mixed martial arts.

Watch an in-depth interview between Megan Olivi and Miesha Tate ahead of UFC 168.

Take a look at some of Miesha Tate's career stats ahead of UFC 168.