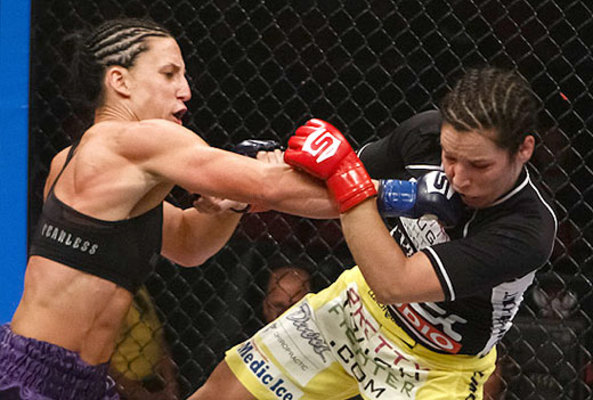 Fighting for a major organization has made Julia Budd ineligible for regional rankings.

Julia Olivia Budd (born July 4, 1983) is a Canadian kickboxer and mixed martial artist. She has fought in MMA promotions Strikeforce and Invicta Fighting Championships. She is the former Bellator Women's Featherweight world champion.

Budd is currently the #3-ranked 145-pound female MMA fighter in the world according to the Unified Women's MMA Rankings.

Budd practiced Muay Thai for many years and later became the only woman to defeat American Gina Carano in Muay Thai competition. Her second and final loss in the ring came by Germaine de Randamie, after which Budd made the move to MMA. Her Muay Thai record is 10–2. She began training in MMA at the end of 2008 and avenged her loss to de Randamie when she defeated her via unanimous decision in a 2011 MMA bout. Budd trains at the Gibson Kickboxing & Pankration Academy.

In 2012, Budd signed with Invicta Fighting Championships and faced Swedish fighter Elina Nilsson at Invicta FC 2: Baszler vs. McMann on July 28, 2012. She defeated Nilsson via TKO in the first round.

Budd returned to Invicta FC on October 6, 2012 at Invicta FC 3: Penne vs. Sugiyama. She was originally scheduled to face Elaina Maxwell, but Maxwell sustained a concussion in training and Budd instead faced Danielle West. She defeated West via TKO in the first round. Budd was scheduled to face Ediane Gomes at Invicta FC 5: Penne vs. Waterson on April 5, 2013. However, on February 15, 2013, it was announced that Invicta FC had signed Cristiane Santos to face Gomes on the card and Budd was to face Australian Fiona Muxlow. On March 19, 2013, Invicta FC announced that Gomes was injured and that Muxlow would now face Santos. Budd remained on the card and instead faced Mollie Estes. She won the fight via submission in the third round. Budd was again scheduled to face Ediane Gomes at Invicta FC 6: Coenen vs. Cyborg on July 13, 2013. However, she suffered a neck injury and withdrew from the fight on June 26, 2013. On December 7, 2013, Budd faced Charmaine Tweet at Invicta FC 7. She won the fight via unanimous decision.