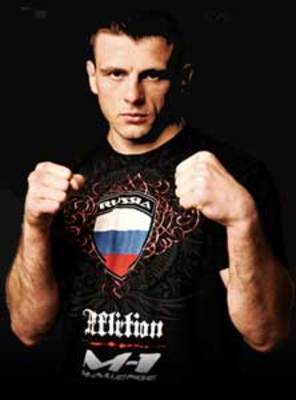 Mikhail Zayats is ineligible for regional rankings due to inactivity.
Fighters must have at least one completed MMA bout in the past two years to be ranked.

Mikhail Zayats is a Russian mixed martial artist competing in the light heavyweight division. He is a Russian Master of Sport in Sambo and holds a black belt in jiu-jitsu.

After compiling a 13-4 record under M-1, Zayats fought then-champion Vinny Magalhaes for the M-1 Light Heavyweight Championship at M-1 Challenge 27. He would come up short to Magalhaes, losing via TKO in the third round.

Mikhail was signed by Bellator in 2012. He made his promotional debut against Brazillian legend Renato "Babalu" Sobral in the opening round of the light heavyweight tournament at Bellator 85. In an upset, Zayats knocked out Sobral in the first round to advance to the sem-finals. In the semis he defeated Jacob Noe via first round submission, earning a spot in the finals against Emanuel Newton in which he would lose a decision. He won his next fight against Aaron Rosa before losing to Muhammed Lawal.