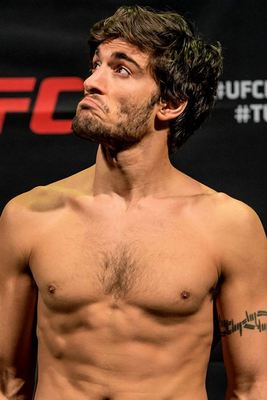 Fighting for a major organization has made Elias Theodorou ineligible for regional rankings.

Elias "The Spartan" Theodorou is a Canadian fighter from Mississauga, Ontario.  At a young age, Theodorou spent most of his time playing baseball or skateboarding. It was not until he saw the TUF 1 Finale: Forrest Griffin vs. Stephan Bonnar fight that he was hooked on the sport of MMA. Like millions of other viewers, he was captivated by Griffin and Bonnar. Theodorou is a former ECC and NAAF Series champion and was the winner of The Ultimate Fighter Nations: Canada vs. Australia.  He was one of four unbeaten prospects members in Team Canada, coached by Patrick Cote.

In the second episode of TUF Nations, Theodorou was picked by Patrick Cote to fight Zein Saliba. Theodorou defeated Saliba in a dominant unanimous decision.  In the tournament semi-finals in the eleventh episode, Theodorou faced undefeated Tyler Manawaroa, securing a unanimous decision victory after the sudden-victory round and advancing to the show's finale.  There, he would face fellow member of Team Canada, Sheldon Westcott.  Theodorou had a dominant showing with multiple takedowns and ground-and-pound on his way to a TKO stoppage with punches and elbows in the second round, securing the Ultimate Fighter title and a six-figure UFC contract.

When Theodorou was fighting on the regional circuit he supported himself by modelling, acting, and being a stuntman - positions that he still does from time to time and plans on continuing in the future, but less frequently due to his rise into the 'big leagues'. Notably, Theodorou has been the cover model to eight different romance novels, something no other UFC fighter can claim.  He has also been a model on TV show Dragon's Den.  Theodorou passed on his biggest acting breakthrough when he was offered roles in the reboots of Godzilla and Robocop. He instead choice to compete on The Ultimate Fighter Nations.

In his first fight since winning TUF Nations, Theodorou faced Bruno Santos at UFC Fight Night 54, winning via unanimous decision. He would make it two straight in the UFC when he finished Roger Narvaez by TKO in the second round at UFC 185.

The Ultimate Fighter Nations Finale Theodorou def. Sheldon Westcott by TKO (punches and elbows) in Round 2

After suffering a setback to Derek Brunson in 2019, Elias was released from the promotion, being ranked #13 at the time. He held a 8-3 record in the promotion. After this release, Elias proceeded to go 3-0 on the regional scene and seemed prime for a comeback. He also accomplished such things as being the first ring-boy in Invicta FC and also became the first athlete to receive a medical exemption for marijuana in Canada.

Sadly, Elias passed away on September 11, 2022 from liver cancer.