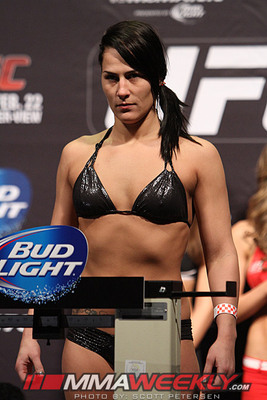 Fighting for a major organization has made Jessica Eye ineligible for regional rankings.

Jessica Eye is a female American bantamweight fighter currently signed to the UFC. She trains out of Strong Style Fight Team in Cleveland, Ohio. She has previously fought for NAAFS where she was both an amateur and professional flyweight champion, Ring of Combat where she was the 130 pound champion, and Bellator. She has notable wins over Zoila Frausto and Carina Damm. Of her eleven professional wins, four have been finishes including three T/KOs.

A life long athlete, Eye was hit by a drunk driver at the age of 16 and was bed ridden for three months. She credits this with giving her the drive to succeed at whatever she tries. A few years later Jessica began studying martial arts and found the sport of MMA soon after. She debuted on the amateur circuit in mid 2008 with a third round TKO win. In her second fight as an amateur, Eye edged Barb Honchak to take a closely contested split decision. The bout was not without controversy however. In the second round, Eye was able to lock on a guillotine choke. While attempting to end the fight with the submission, the referee briefly stepped in to make sure that Honchak did not tap. He quickly restarted the fight but many fans felt that the damage had been done, including Jessica herself.

After racking up a 5-0 record as an amateur, she made her professional debut in 2010 with a second round TKO. She quickly scored three straight victories and the 130 pound title in ROC which earned her a shot at the NAAFS Flyweight title. She would face Ireland's Aisling Daly in the bout. The fight would be the first setback of Eye's young career, suffering a second round submission loss to the highly regarded Irish fighter.

After losing to Daly, Jessica signed with Bellator Fighting Championships and went on a 5-0 run with two wins in Bellator and three with NAAFS prior to agreeing to fight the much better known Zoila Frausto at Bellator 83. After much trash talk and bad blood, partly because Zoila said that Eye was an MMA groupie turned fighter, the fight took place on Friday December 7 2012.  Both fighters rushed out into the center of the octogan throwing wildy, displaying that the bad feelings towards one another took precedent over a more technical fight strategy.  Eye got Frausto up against the cage and sunk in a standing arm triangle choke. Unfortunately, Zoila was out before the ref could recognize it and Eye was holding her up against the cage while Frausto was unconscious. Jessica yelled at the ref and the fight was stopped in less than one minute. After her win over Frausto, Eye would fight once more for NAAFS, this time winning a unanimous decision over Carina Damm.

In min 2013, Jessica was signed to the UFC. She made her promotional debut against top contender Sarah Kaufman at UFC 166. Eye would get the nod from the judges in a very close and controversial split decision, but the fight would ultimately be overturned to a No Contest after Eye failed her drug test due to marijuana. She later claimed that she likely failed it due to second hand smoke from her father who used medical marijuana to treat his brain cancer. She next took on Alexis Davis at UFC 170 but ended up losing a split decision. Afterwards, she obtained a notable TKO victory over Leslie Smith at UFC 180, in a fight that saw Smith suffer from a partial detachment of her left ear caused by Eye's strikes, Eye's last two fights to date have ended in unanimous decision losses against Miesha Tate and Julianna Pena.