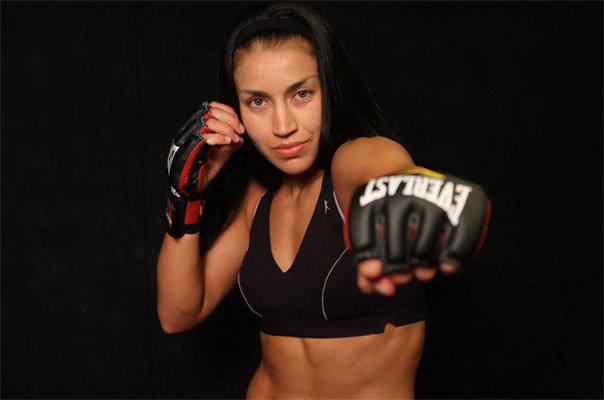 Zoila Frausto is ineligible for regional rankings due to inactivity.
Fighters must have at least one completed MMA bout in the past two years to be ranked.

Zoila Frausto made her debut in mixed martial arts on February 13, 2009 with a split decision victory over Karina Hallinan. She kept fighting in the same year obtaining two more wins in local competition in California, and later in 2009 she made her debut at Strikeforce Challengers with a unanimous decision win over Elisha Helsper.

2010 was a very important year for Frausto's career. She started with a victory over Jessica Rakoczy by armbar at Tachi Palace Fights 3. Then she made her return to Strikeforce Challengers to fight Miesha Tate in a very intense bout that was preceded by serious tensions between the two fighters.  The fight was won by Tate by armbar, but this did not stop Frausto's momentum. As 2010 continued, Frausto kept fighting against high-level opponents. First she defeated Michelle Ould, who suffered an ankle injury during the fight. Then she made her debut at Bellator by knocking out Rosi Sexton with an impressive knee strike followed by punches. Afterwards, she entered the Bellator's 115lb womens champsionship, where she defeated Jessica Penne by unanimous decision, and Jessica Aguilar and Megumi Fuji by two controversial split decisions. The victory over Fuji gave Frausto the championship, and was the first loss in Fuji's glorious career. This result can be considered as the peak in Frausto's MMA career.

Frausto's only fight in 2011 was a rematch against Karina Hallinan, at  Bellator 35, that Frausto won by unanimous decision.

Frausto later suffered a torn ACL that sidelined her for a year. She came back to the cage in  October 2012, defeating Casey Noland by unanimous decision at Bellator78.  She next faced Jessica Eye in a non-title bout at 125lbs in which she lost in the first minute via standing arm triangle. In 2013 she started competing in Invicta Fighting Championship, losing against Jennifer Maia and Vanessa Porto by unanimous decision. In 2014 she only competed in kickboxing, where she obtained three victories in as many bouts. She came back to MMA in 2015 fighting for the Resurrection Fighting Alliance (RFA) vacant strawweight championship, losing against Jocelyn Lybarger again via unanimous decision.