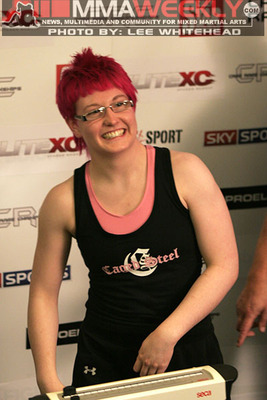 Aisling Daly is ineligible for regional rankings due to inactivity.
Fighters must have at least one completed MMA bout in the past two years to be ranked.

Aisling Daly was born on Christmas Eve, in 1987, in Drimnagh, Dublin, Ireland. Daly began training in MMA at the age of 17. In her own words she "saw MMA as being the ultimate form of physical and mental competition, so I wanted to see how far I could go there". Two years later Daly made her MMA debut, in Denmark. She would defeat her opponent; Nicole Sydboge, via submission in Round 2.

Soon after, Daly signed with (now defunct) U.K. promotion, Cage Rage Championships. For the next three years, Daly fought between Cage Rage and regional bouts, earning herself a 9-0, with 8 finishes. Daly was also the first female to win a bout with Cage Rage.

In 2010, Daly was signed by Bellator to participate in their Strawweight tournament. Daly met fellow TUF 20 contestant, Lisa Ellis at Bellator 26. Daly would lose to Ellis via UD. After the bout Daly was released from Bellator; she was expected to make a return against Jessica Eye, at Bellator 66, but was forced to pull out due to an ear infection.

Daly would go 5-4 in her next 9 bouts, with various promotions, including Cage Warriors and Invicta FC. During this period Daly fought high-level opponents, including, Rosi Sexton, Barb Honchak (now Invicta FC Flyweight champ), and Katja Kankaanpaa. Also during this time, Daly was switching from 115 and 125 divisions.

On 3 July, 2014, it was announced that Daly; along with 15 other fighters, would star in the 20th season of The Ultimate Fighter, to determine the inaugural UFC SW champion. Daly was seeded 5th out of the 16 there. However, Daly was the last picked, when Team Melendez selected Angela Magana (ranked 12th), forcing Daly onto Team Pettis.

After two rounds the judges determined that a third round was need; half way through the final round Daly defeated Magana via TKO, moving her onto the quarterfinals. This earned Daly an enemy, as Magana was hostile to her during the rest of the season and well after it.

Daly faced Penne in the quarterfinals. Daly would lose the bout after three rounds.

For the season finale - The Ultimate Fighter 20 Finale, Daly was slated to face TUF teammate, Alex Chambers. Daly used her superior ground game to submit Chambers late in Round 1, with an armbar. Daly did however miss weight for this bout and was forced to forfeit a third of her purse to Chambers.

Daly next faced another Team Pettis teammate, Randa Markos, in Markos' home country of Canada, at UFC 186: Johnson vs. Horiguchi.
Daly was outclassed by Markos' aggression and lost the bout via unanimous decision.

Daly is expected to Ericka Almeida, in her hometown of Ireland, at UFC Fight Night 76: Poirier vs. Duffy.

With a loving character and a friendly attitude, Daly is very popular among her fellow fighters and a fan-favourite. Daly currently trains out of her hometown gym of Straight Blast Gym.