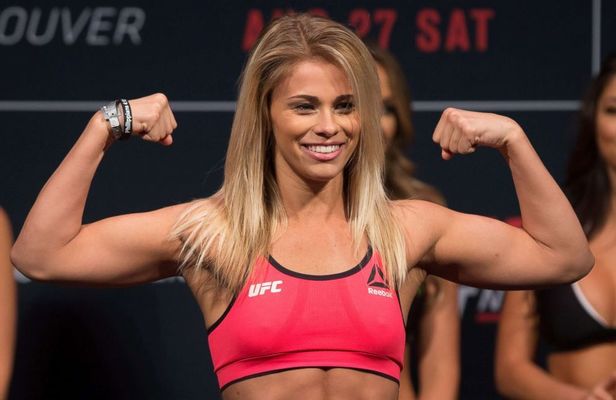 Paige VanZant is ineligible for regional rankings due to inactivity.
Fighters must have at least one completed MMA bout in the past two years to be ranked.

UFC announced that VanZant would face Kailin Curran on October 4, 2014 in Halifax at UFC Fight Night: MacDonald vs. Saffiedine, but VanZant suffered a back injury and the bout was rescheduled for UFC Fight Night: Edgar vs. Swanson. VanZant marked her UFC debut by defeating Curran by TKO in the third round, in a fight that would win Fight of the Night honors.

After defeating Kailin Curran, VanZant enjoyed an increase in popularity. In February 2015, VanZant was signed to a sponsorship deal with athletic footwear giant Reebok. With only one professional UFC fight this became a source of jealousy and controversy since it was only thought she received the sponsorship because of her beauty. Only 6 fighters have separate sponsorship deals with Reebok. With the exception of Conor McGregor, who receives a title shot in 2015, VanZant is the only fighter sponsored by Reebok that hasn't had a UFC title or is a current UFC champion. UFC owner, Dana White, has said she received the Reebok deal because of her "it" factor and personality.

VanZant faced Felice Herrig on April 18, 2015 in Newark, New Jersey at UFC on Fox 15. She won the fight by unanimous decision.

She faced Alex Chambers on September 5, 2015 at UFC 191. After controlling most of the fight with aggressive strikes and grappling, she won via armbar submission in the third round.

VanZant signed a new contract with UFC on September 17, 2015.VanZant was expected to face Joanne Calderwood on December 10, 2015 at UFC Fight Night 80. However, Calderwood was pulled from the fight in October and replaced by Rose Namajunas.

Her next fight was against Bec Rawlings at UFC on fox 21. Vanzant won the fight early in round 2 by way of an incredible jumping switch kick followed by ground and pound.

Her next fight was against the karate hottie Michelle Waterson on UFC on fox 22. She lost by rear naked choke in round 1.

Her next fight was against jessica rose clark on UFC fight night 124 which she lost by unanimous decision after injuring her arm vanzant took a whole year off to recover.

On Saturday January 19 Vanzant made her return to the UFC on the inaugural ESPN+1 fight card.  She faced Rachel Ostovich who seemed to be controlling the fight in the first round with her aggression, power and wrestling.

However in the secound round Vanzant put up numerous submission attempts finally catching Ostovich in a belly down armbar.

Her next fight against Amanda Ribas was cancelled so Vanzant could have surgery to repair a broken arm.