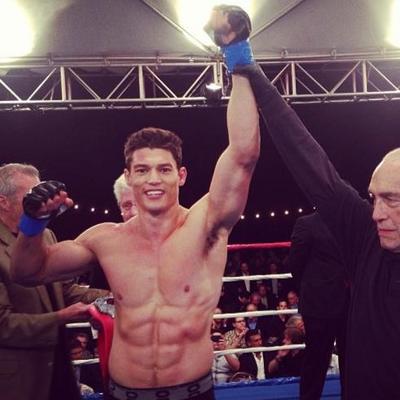 #96
Greatest MMA Grappler of All Time

Fighting for a major organization has made Alan Jouban ineligible for regional rankings.

Alan Jouban was born on 25 November, 1982, in Lafayette, Louisiana, USA. Prior to being signed with the UFC Jouban was studying at his hometown's university - the University of Louisiana at Lafayette. He left university before finishing his degree and moved out to Los Angeles. There he supported himself by modelling in print ads and occasionally commercials. Jouban currently still resides in LA, where he trains at Legends MMA.

Jouban began training in Muay Thai in 2005 because he had always wanted to know how to fight. It eventually led him into MMA and he is currently a brown belt in Jiu Jitsu under Eddie Bravo. Jouban was undefeated in amateur MMA and Muay Thai and actually finished two MMA fights in a row by Gogoplata. He won the Fight Club OC welterweight title with a first round TKO of Rigo Oropeza.

Jouban owns notable wins over Chris Spang and Ricky Legere Jr. in Ressurection Fighting Alliance. After the win over Legere he was signed to the UFC to face Seth Baczynski. A tough test for his first fight Jouban passed it with flying colors finishing Seth in the first round by TKO and also earned a Fight of the Night bonus.

Jouban was billed at the co-main event at UFC Fight Night 56: Shogun vs. St. Preux, after Ian McCall fell ill and his fight with John Lineker was dropped. There Jouban he faced undefeated and TUF Brazil 3 winner - Warlley Alves. After 15 minutes of a back-and-forth battle, it went to the judges to render a decision. They awarded the fight to Alves via UD to much of the surprise of the non-Brazilian fans. Kenny Florian who was the commentator for the event said that Jouban was "robbed" of the victory.

In his next fight Jouban would make sure that it stayed out of the hands of the judges. He faced Richard Walsh, at UFC 184: Rousey vs. Zingano. He made short work of Walsh and was the first person to knock him out when he finished the fight at 2:19 in Round 1.