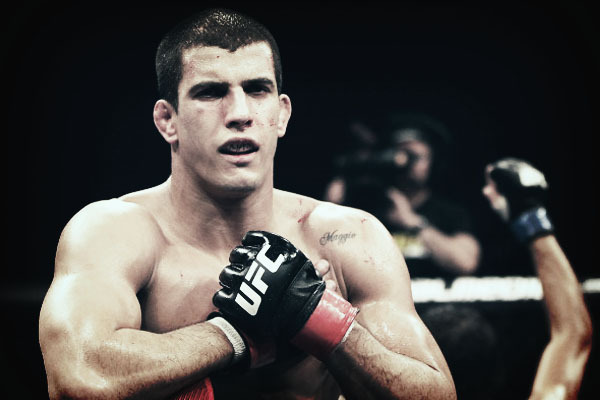 Felipe Arantes is ineligible for regional rankings due to inactivity.
Fighters must have at least one completed MMA bout in the past two years to be ranked.

Felipe Arantes is a Brazilian featherweight fighter currently signed to the UFC. He is a black belt in Muay Thai under Diego Lima at Chute Boxe and a purple belt in Brazilian Jiu Jitsu from Marco Barbosa at Barbosa JJ. He tr4ains out of Macaco Gold Team in Newark, New Jersey. The nickname " Sertanejo" means country music. He has notable wins over John Lineker, Antonio Carvalho, Godofredo Castro, and Maximo Blanco. Of his sixteen professional wins, eleven have been finishes including seven T/KOs.

Arantes started training in Judo and Tae Kwon Do when he was twelve years old and Muay Thai when he was fourteen. He eventually turned to MMA training after high school when he turned 18. He made his professional MMA debut in April 2008, but would lose by armbar in the first round. He would go on to win six of his next seven fights in smaller Brazilian promotions including a first round armbar win over future UFC fighter, John Lineker. He would lose his next two fights before having a fight in Pennsylvania overturned to a No Contest after Arantes wore pants during the fight, which is illegal, and he was also suspected of greasing. He would go on a seven fight winning streak before again having a win ruled a No Contest. This time, he had originally won the fight by TKO, but it was later ruled that he had landed an illegal knee to a grounded opponent and he was therefore stripped of the win.

Felipe was signed by the UFC in the middle of 2011. He made his promotional debut against Iuri Alcantara at UFC 134, but would lose by unanimous decision. He would get his first win for the promotion when he took a unanimous decision against Antonio Carvalho at UFC 142. He would fight to a rare split draw against Milton Vieira at UFC 147. After taking a year off from competition, he would return with a first round TKO win over Godofredo Castro, but would follow it up three months later with another decision loss, this time to Kevin Souza at UFC Fight Night 28. He took on Maximo Blanco at UFC Fight Night 36. Despite suffering a low blow in the third round that his opponent was deducted a point for, Arantes was able to continue on to a unanimous decision win.