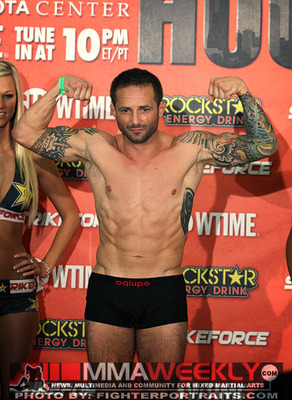 Chad Robichaux is ineligible for regional rankings due to inactivity.
Fighters must have at least one completed MMA bout in the past two years to be ranked.

Regarded as a top submission specialist in the flyweight and bantamweight divisions, Chad 'Robo' Robichaux made his professional MMA debut in 1999, and would win this fight and his next 11 fights by submission. After amassing a 12-0 record, Robichaux would take part in a 130 pound catchweight fight at 'Strikeforce: Houston' against Humberto DeLeon, where he would see this distance for the first time in his professional career. After beating DeLeon by split decision, Robichaux would take on Bellator champion Zach Makovsky at Bellator 41. Robichaux would lose the non title fight in the third round by TKO. This marked the first loss of Robichaux's career. In his next outing, Robichaux would fight at Legacy FC 7, taking on Jonathan Mackles in front of a hometown crowd in Houston, Texas. Shockingly, the BJJ black belt would be forced to submit only 45 seconds into the contest, as he was caught in a guillotine choke after shooting in for a takedown. From there, 'Robo' would make the drop to 125 pounds, where he would defeat former UFC fighter Joseph Sandoval in the first round with a rear naked choke.

Aside from having a successful MMA career, Robichaux has been a martial artist all his life, and has been training in Brazilian Jiu Jitsu since 1996. A native of The Woodlands, Texas, Robichaux is also known for his time spent as a United States Marine.