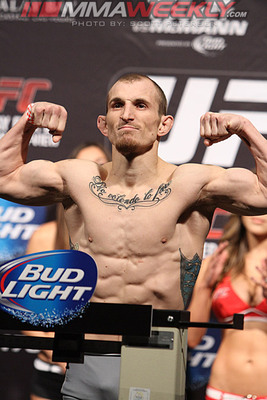 Josh Sampo is ineligible for regional rankings due to inactivity.
Fighters must have at least one completed MMA bout in the past two years to be ranked.

Josh Sampo is an American flyweight fighter currently signed to the UFC. He holds a purple belt in Brazilian Jiu Jitsu and trains out of St. Charles, MO. He was a two time Nevada state high school wrestling champion and a three time All American wrestler out of Lindenwood University. While in college, he earned a Bachelors degree in Biology with a minor in Chemistry as well as a Masters in Education. He holds a notable win over Antonio Banuelos. Of his eleven wins, six have been finishes with all of those coming by submission. He has won the "Fight of the Night" bonus one time.

Sampo began his fighting career in 2008 as a way to continue to compete after his collegiate wrestling career was over. In his first fourteen months as an amateur, he was able to compile a perfect four fight record with all stoppage victories. He would turn pro in late 2009 and go on to win his first three professional fights. He would suffer his first loss in 2011 but would again win his next three. He faced the biggest test of his career when he took on WEC and UFC veteran, Will Campuzano, but would falter, being put down by a knee from his opponent. This marked the only time he has been finished in a fight. After tallying another two wins, including a decision win over WEC and UFC veteran, Antonio Banuelos, he would be given a shot at the CFA title against Bellator veteran, Alexis Vila. Josh was able to stop the fight midway through the fifth round by rear naked choke in order to win the 125 pound title. He would defend the title once, this time winning by decision.

In late 2013, Sampo was signed by the UFC. He made his debut at The Ultimate Fighter 18 Finale against fellow debuter, Ryan Benoit. He weighed in at 127.5 pounds for the flyweight bout and was fined ten percent of his purse. Following a close, back and forth fight, Sampo would pick up a rear naked choke submission near the end of the second round. Their fight would earn "Fight of the Night" honors but since he missed weight, his $50,000 bonus was given to his opponent. He was riding a five fight winning streak when he took on former Bellator bantamweight champion, Zach Makovsky, at UFC 170, but his streak would be snapped when he lost a unanimous decision.