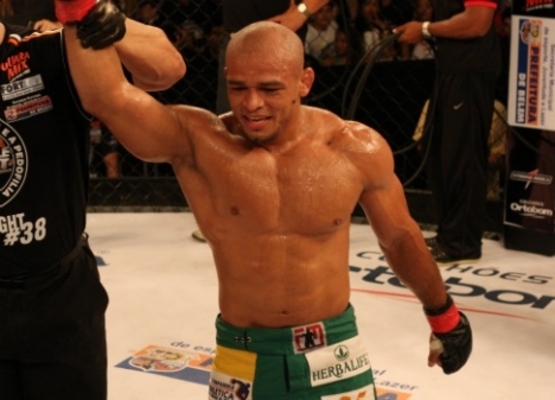 Iliarde Santos is ineligible for regional rankings due to inactivity.
Fighters must have at least one completed MMA bout in the past two years to be ranked.

Iliarde Santos is a flyweight fighter who is currently signed to the UFC. Of his 28 wins, 18 have been stoppages with 12 T/KO. He has never been submitted and has only been finished three times with one of them at the hands of UFC vet Iuri Alcantara. Although he was on the losing end of the decision, Santos was awarded Fight of the Night against Ian McCall.

Iliarde began his career fighting on the local circuits in Brazil. He fought as many as 10 times in 2009 alone eventually worked his way up to the Jungle Fight promotion. He often would struggle when he would get to the upper level fighters of these promotions but would eventually sign with the UFC in 2013 with a record of 28-6-1 2 NC.

He would make his promotional debut at bantamweight against Iuri Alcantara. He would come up short in that fight, losing by TKO for the first time in three years. He would drop to flyweight for his next bout and take on perennial contender, Ian McCall. He would land only 26% of his strikes throughout the fight and lose by unanimous decision. He next took on fellow two fight in a row loser, Chris Cariaso, at UFC Fight Night 29. He went on the first three fight losing streak of his career when he was stopped do to strikes late in the second round.