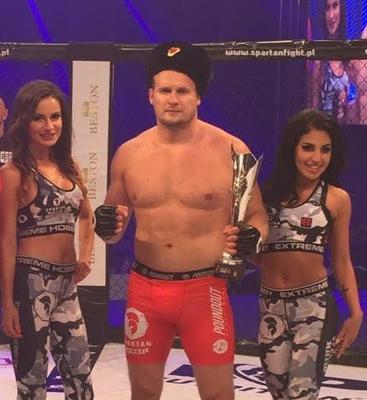 Fighting for a major organization has made Vitaly Shemetov ineligible for regional rankings.

Vitaliy SHEMETOV was born in Siberia - the coldest region of USSR (currently Russia).

Russia is the coldest country on Earth, thus Vitaliy was born in "the coldest of the coldest" and he had no choice than to be a tough and an extremely strong guy.

During his career he fought in

His nickname "Dancing Russian" he got after a funny dance which accompanied the glorious win (video here) in USA over Shungo OYAMA, who fought during his fight career vs such MMA and K-1 superstars as Mirko "Cro Cop" FILIPOVIC, Melvin MANHOEF, Renzo GRACIE, Peter AERTS, Dan HENDERSON, Wanderlei SILVA, etc.

From 7 years old he used to train together with his elder brother Sergey SHEMETOV different martial arts mainly focused on Muay Thai and Russian sambo.

Often without any equipment young fighters had to train outside even in ice-cold wintertime. That inspired him to create his introduction video.

Afterwards in 2006 he entered international MMA events in Japan, where he was trained for 1 year by famous K-1 superstar Nicholas PETTAS and won MARS (Japanese MMA organization) bouts.

In 2008 he moved together with his brother Sergey to Netherlands, where they both were trained by legendary coach Lucien CARBIN. They trained together with Tyrone SPONG, Alistair OVEREEM, Semmy SCHILT.

In 2010 they trained in Duke ROUFUS Gym.

Despite of the fact that 2 brothers were always training together, they never fought against each other, as they promised to their parents, but actually they always were in different weight divisions as well.

His name Vitaliy ("Виталий" on Russian) is often miswritten as Vitaly, Vitali, Vitalii, Vitalius.
Together with brother he owns fight club "ShemBros Academy" in Omsk, Russia.

One important thing for which Vitaliy is beloved by an audience is his awesome entrance, entrance music and fight show based on USSR theme.

His ability to make a good show is also remarkable during several local MMA fight events in Omsk, Russia which Vitaliy together with his brother Sergey arrange from time-to-time.

In 2013 Vitaliy and his brother were Bob's SAPP official representatives during his fight against Alexander EMELIANENKO.