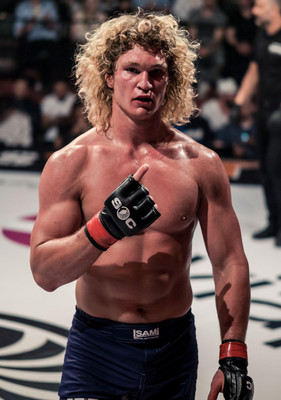 Fighting for a major organization has made Karl Albrektsson ineligible for regional rankings.

Karl "The King" Albrektsson is a solid and athletic young fighter who is as well rounded as they come for a guy with only 4 pro MMA fights. Albrektsson has been a pro since late 2012, picking up a 4-0 record since then. It's also worth noting that Albrektsson has competed in some Shootfighting bouts which aren't on his record.

Albrektsson fights from Pancrase Gym Sweden which is based in Stockholm and houses fighters such as Ilir Latifi, current PXC WW champion Zebastian Kadestam and Swedish veteran Matti Makela. Although Pancrase Gym is his home gym he also travels to America to train at CSW with UFC HW Josh Barnett who seems to have taken Albrektsson under his wing.

Albrektsson has a successful background in Sanshou having won the Euros in 2014. He was also a competitor on the recent BJJ show, Road To Metamoris where he reached the finals before succumbing to Jimmy Freidrich.

Here is a write up on Albrektsson: http://ultimatelymma.blogspot.co.uk/2015/05/one-to-watch-karl-albrektsson.html