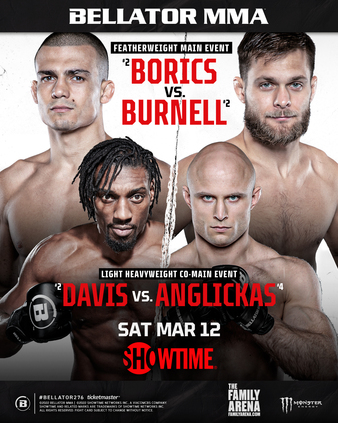 Bellator 276: Borics vs. Burnell
"The official Tapology discussion thread for the event!" (10 months)

i THOUGHt he came from a wrestling background, you know how greco roman is big in Denmark, but he must have started with jiu jitsu/MMA then?

Yea, mma wrestling and all is so different. He’s gotta change his approach to combat with striking as Borics can’t solely concentrate of striking. Pure wrestling match you are both engaging in that discipline willingly. If you circle out with jo cage or ropes you’ll get stalling calls and such. It’s such a different game. Mma wrestling is similar but different. It’s all how he puts it together. If I were him I’d of tried to chain more together but if you force and miss you can really exhaust yourself hunting. Sometimes guys feel good standing even though their slightly getting out pointed. If He wasn’t doing so well keeping it competitive it would possibly have given him more urgency to get it down or even pull guard and win in scrambles. Also Greco is all upper body where Borics Thai style is good clinches going to cage and circling out. Some think Greco is best but I think it depends on individual styles. It’s more of a limited attack without legs than free and folk. But what do I know. I’m just an armchairfighter here. Lol

Tapology members can make predictions for upcoming MMA & Boxing fights. Bellator 276 is closed for new predictions. 1,060 total members made predictions on this event, breaking down as follows below.

Leaderboard of the best predictions by member: Bellator 276 Leaderboard