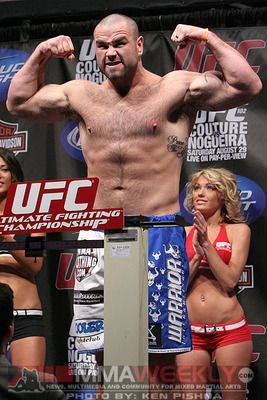 Tim Hague is ineligible for regional rankings due to inactivity.
Fighters must have at least one completed MMA bout in the past two years to be ranked.

Additional information reported at the time:

A former kindergarten teacher in Rochester, Alberta, Canada, Tim Hague may not act the part of a heavyweight finisher, but make no mistake about it, he is a solid contender in the division who holds notable wins over Sherman Pendergarst and Pat Barry.

After assembling a 9-1 record, Hague was invited to join the UFC in 2009, winning his first fight against hyped kickboxer Pat Barry. After Barry rocked Hague early on into the first round, Hague tied him up on the ground and forced the tapout at the 1:42 mark.

Unfortunately for Hague, he would lose his next three UFC fights, including a battle with Todd Duffee in which he became the victim of the fastest official knockout in UFC history, and was bounced from the world's top promotion.